Xiaomi launched the affordable Redmi 5A in India on December 7. In under a month, the company managed to sell over 1 million units, according to Manu Kumar Jain, managing director of Xiaomi India. He bragged about the milestone on Twitter to thank the Mi fans and to hand out Mi Band HRX devices to five lucky winners who retweeted the message. 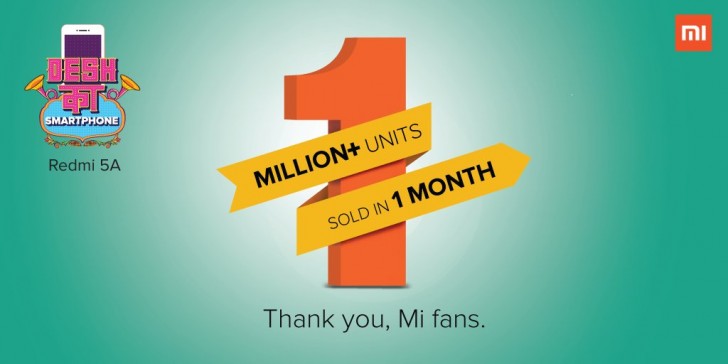 The Xiaomi Redmi 5A is promoted as “Desh Ka Smartphone”, or translated from Hindi as “the country’s smartphone”, meaning the phone is made by Indians for Indians.

The phone comes in two versions - 2 GB RAM + 16 GB storage and 3 GB RAM + 32 GB storage. The less powerful unit goes for INR4,999, discounted from INR5,999, while the other costs INR6,999. Both variants are available in either Black or Gold color and are exclusive at Flipkart.

XIAOMI KNOW How sell smartphone to Indian customer... LG and HTC should learn from Xiaomi.

Yes... Because it's all about value for money... People are not going to pay for brand value... They're getting smarter...

Ok you can buy Nokia And Samsung .. Than you will see.. We are happy with Xiaomi.