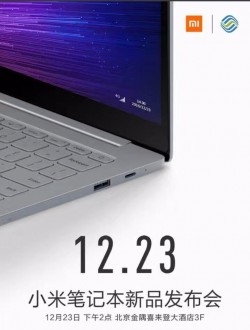 Xiaomi announced the Mi Notebook Air back in July as its very own high-end entry into the laptop space. Almost half a year later, the Chinese company is ready to reveal a new version of this device. So it's scheduled a special event for that purpose, which will take place on December 23, which is this Friday.

The teaser image you can see to the left has surfaced in China, and it shows us a very small part of the upcoming laptop. The overall design seems to have remained the same, though. What is intriguing is what can be seen in the bottom right of the screen - namely a 4G signal strength indicator.

This confirms that the new Mi Notebook Air will come with built-in mobile data connectivity, supporting 4G LTE networks. Unfortunately no details about which bands will be supported have been leaked, nor anything else about the new laptop really.

So this could just be a 4G-enhanced variation of the already available Wi-Fi-only Mi Notebook Air, coming with the exact same specs otherwise. Of course there's also a chance that Xiaomi has refreshed the device's internals too, but it's impossible to tell. Hopefully we'll see some leaks about it in the next couple of days. If not, we'll find out everything there is to know about it on Friday.

at last there is 4G notebook

Just call it MiBook Air next time. It is already obvious where you got the "inspiration"