Xiaomi's next Mi flagship has been popping-up hire ant there, from time to time in the last few months, but with little actual accompanying info. A few days ago, a couple of alleged live photos of the device did surface, matching earlier rumors of a quad-camera setup, but also missing the mark on others, like an alleged notch and hole-free display. 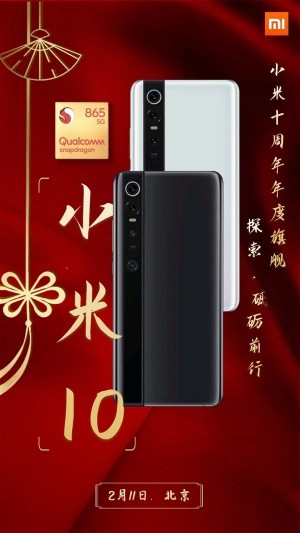 Thankfully, we now have an official-looking banner to reference. Instantly, we have to notice the Mi Mix Alpha inspired design, the Mi 10 is rocking. Of course, no crazy, futuristic wrap-around display in sight, but the strip is definitely a nod in the direction of Xiaomi's recent tech showcase. So, even though the Mix Alpha might be off the table for good, we might at least get a new distinctive Xiaomi design language out its brief existence.

Kind of pointing out the obvious here, but, nonetheless, also on the banner we find a Snapdragon 865 5G badge. Pretty much expected. Still, it's nice to see a confirmation for 5G connectivity. Though, it could still be limited to the Mi 10 Pro version, which we do officially know will exist alongside a vanilla. That part remains to be seen. There is also a February 11 date on the banner. It is pretty self-explanatory and a February launch for the Mi 10 has crept up before through the grape vine as well.

They alreqdy had flash sale in China of mi 10 pro, but nobody knows how it looks probably even the buyers. Or all that was PR :) As I understand even mi10pro is not 100% official and might not look like the 1st official part leak last week

So sad this wasn't the actual design.

Well well well what we ahve here. A handome young man and woman going along side together. This popular duo looks awesome. I hope for a decent pricing on this gorgeous device.