The Xiaomi Mi 10 Pro has the best camera system Xiaomi has on offer, and it consists of four snappers - a 108MP primary, a 20MP ultrawide, a 12MP telephoto (2x), and an 8MP shooter for long-range 5x zoom. There is a small black spot around these snappers and inside is hidden the laser emitter and receiver that comes to assist the autofocus. 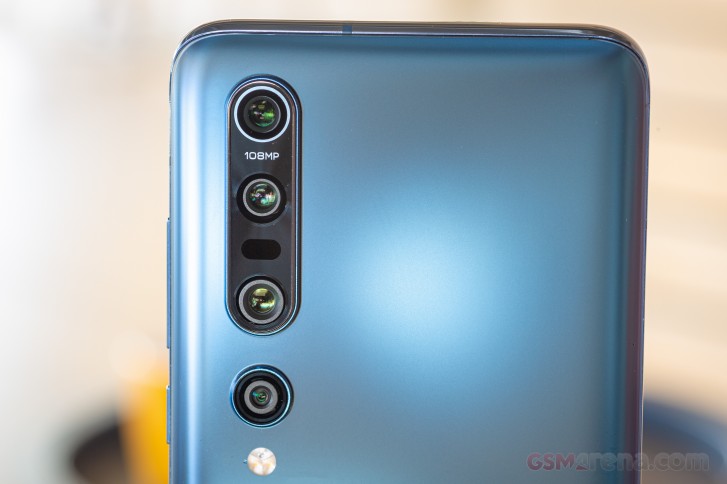 Let's go through all the technical bits.

The main camera is based around Samsung's ISOCELL Bright HMX sensor, a 108MP imager, but you'd be mistaken if you think it is the same as on the Galaxy S20 Ultra. No, the Ultra packs HM1 with Nonacell technology (9-in-1 pixels), while the Mi 10 Pro has HMX (does X stand for Xiaomi?) and it is based on Tetracell (4-in-1 pixels).

The sensor is paired with an 8-element lens that is stabilized and has an f/1.69 aperture. It covers an 82-degree field-of-view, which in our world equates to a 25mm in 35mm equivalent (sure enough, it says 24mm in EXIF data).

Next up is the telephoto camera - the first of two. It is a 12MP Samsung ISOCELL Fast S5K2L7 1/2.6"sensor with 1.4µm pixels, dual-pixel autofocus, and bright f/2.0 lens - pretty nice specs for a zoom camera. There is no OIS here, though.

The second telephoto camera is rather familiar from the Mi Note 10. It uses an 8MP OmniVision OV08A10 1/4.4" sensor with 1.0µm pixels and f/2.0 94mm lens. Both OIS and PDAF are available for this shooter. This is the camera that provides a 5x zoom or 125mm equivalent. But how, you may ask?

Well, it is something that OnePlus 7T Pro did first - it had an advertised 8MP 3x zoom camera. This camera was, in fact, a 13MP unit with a 2.2x magnification. An 8MP crop from the center of this camera equaled a 3x magnification, and this was how it was tuned by default.

The Mi 10 Pro uses a similar approach - the 8MP sensor with 94mm lens provides 3.7x or so magnification by default. The algorithm then crops a 5MP center of this 8MP image and voila, you now have a 5x zoomed photo. But then Xiaomi claims this is an 8MP camera, so it upscales the image back to 8MP, even though we would have been perfectly fine with the 5MP center. We guess 8>5 and is better for PR reasons.

Finally, the Mi 10 Pro has a Sony IMX350 20MP 1/2.78" sensor with 1.0µm pixels mated to a (13-ish mm equivalent) lens that covers a 117-degree field of view for ultrawide photos. The aperture is a less impressive f/2.2, but more importantly, this ultra-wide cam has autofocus, unlike the bulk of the ultrawides out there. This means it can also do closeup photos and videos.

Hybrid zoom is available up to 10x. The 108MP primary is used for up to 2x zoom, the 12MP tele camera takes over between 2x and 3.7x magnification, and the 5MP is responsible for the 3.7x shots and above. The 10x magnification uses the 8MP cam and stacks a bunch of shots (oversampling) for better quality. 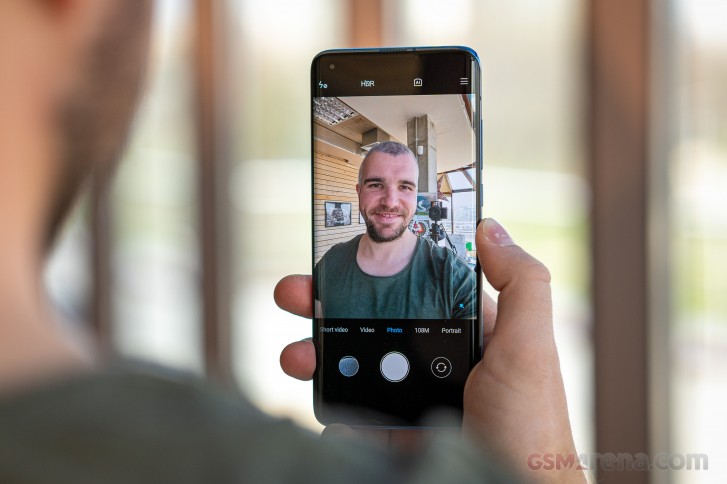 Over on the front, the Mi 10 Pro has a 20MP camera for selfies - it uses Samsung's ISOCELL Slim S5K3T2 1/3.4" sensor with 0.8µm pixels and Quad-Bayer color filter. It still spits images at the nominal 20MP resolution, so you should not expect great levels of detail. Xiaomi specifies an f/2.0 aperture but omits the focal length. Autofocus isn't available for selfies.

The camera app is a rather straightforward implementation. You swipe from side to side to change modes, and you can also tap on the ones that you can see to switch to those directly, though they don't all show up in one screen. Up and down swipes don't work for switching between the front and rear cameras, only the toggle next to the shutter release does that.

On the near end, you have the rear camera switch that operates in one of two fashions. The first one is simply tapping on the circle with the active magnification to cycle between the four cameras - main 1x, tele 2x, tele 5x, ultra-wide 0.6x - leaving out the macro mode. Alternatively, you can tap on the respective dots for direct access to each module - that's neat because the cycle-only implementation would have been particularly time-consuming with such a number of cams. Not that it's overly convenient on the triple-cam Xperia 1 and 5, but we digress.

On the opposite end of the viewfinder, you have a flash mode switch, an HDR switch, an AI toggle and a magic wand with beauty effects and filters. Behind a hamburger menu, you'll find some more options, plus the shortcut to the settings. What you won't find is an option to set the output resolution for any of the cameras.

There's a nicely capable Pro mode, where you can tweak the shooting parameters yourself. You get to pick one of 4 white balance presets or dial in the light temperature with a slider, there's a manual focusing slider (arbitrary units 0-100), and shutter speed and ISO control with ranges depending on which camera you're using. That's right, best of all, you can access each of the five cams in Pro mode. There's also a focus peaking toggle up top, as well as a metering mode selector. All four cameras support a maximum shutter speed of 30 seconds. Night Mode is available in Pro mode too, but it works only on the primary camera.