An unknown Xiaomi device with model designation M2012K11C has appeared on Geekbench. It runs Android 11, has 6GB RAM onboard, and is powered by a Qualcomm chip, which is likely the yet-to-be-announced Snapdragon 875 SoC. More so because the source code of the listing mentions Adreno 660 GPU, which is rumored to be a part of the Snapdragon 875 and isn't available on the current Snapdragon chips.

The M2012K11C - which is said to be the Mi 11 - achieved a score of 1,105 and 3,512 in Geekbench 5's single and multi-core tests, respectively. Since this is possibly a prototype, we'll likely see improved performance of the Snapdragon 875 upon release. 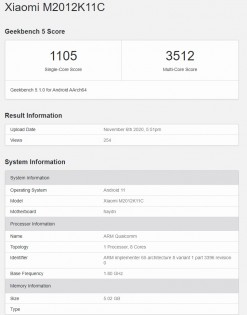 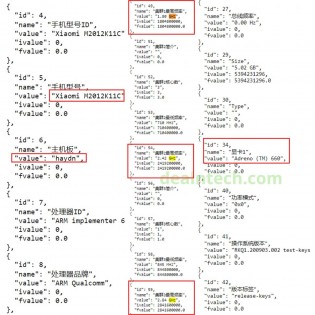 Qualcomm will announce the Snapdragon 875 SoC on December 1. It hasn't revealed any details about the new flagship chipset yet, but thanks to a reliable leakster we know the 5nm chip will have one Cortex-X1 clocked at 2.84GHz, three Cortex-A78 clocked at 2.42GHz, and four power-efficient Cortex A-55 running at 1.8GHz.

Real world??? How and you do know he compared a chip that came from 8 months ago to a chip in This month I think??? 7nm to a 5nm that sounds so fair.