The Mi 4c retail box covers just the basics or so it seems. There is USB Type-C cable and a charger, but no headset.

A closer inspection of the charger reveals it is the Fast Charging variety and supports 5V (2A), 9V (1.2A) and 12V (1A) charging. Unlike some major manufacturers, which don't include such 'expensive' chargers inside their retail boxes, Xiaomi was kind enough to supplement the charger.

Xiaomi Mi 4c sits at 138.1 x 69.6 x 7.8 mm - absolutely the same footprint as the Mi 4i. Both devices are virtually identical by exterior, though the Mi 4c hardware upgrade has meant an extra 2g of weight for a total of 132g.

We can put some sugar on it, but the truth is Xiaomi didn't bother to come up with any changes on the Mi 4c design. It employs the same polycarbonate shell as its predecessor, the Mi 4i. Truth be told, the design is getting repetitive already and we'd like to see something new from Xiaomi sooner rather than later. 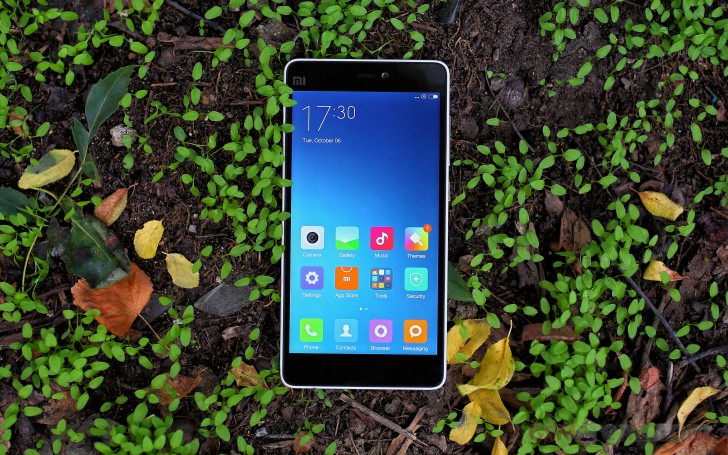 Yet, while refurbished design isn't the best approach for a new device, it isn't a rarity either. Sony does it, Samsung does it, and Apple sure does the same with the iPhone 'S' series.

On a positive note, the polycarbonate plastic shell of the Xiaomi Mi 4i was a great for its price, providing for good grip and pleasant handling, so we are glad to have more of the same quality around. The white matte rear panel is not prone to smudges and is very grippy.

Finally, a 5" phone was never considered that compact, but the thin and lightweight Xiaomi Mi 4c, just like the Mi 4i, is among the most compact and pocket-friendly devices we've met in this class. Its exterior might be designed with the affordable factor in mind, but it does get right quite a few things a lot of flagships can't get even close to.

The control set of the Xiaomi Mi 4c is the same as on the Mi 4i - that means a pretty straightforward one. Above the display the earpiece is flanked by a couple of sensors and the 5MP selfie snapper. There is a small hidden notification LED, too.

A peek above and below the 5" display

Below the screen we find the traditional capacitive set of Task Switcher, Home and Back keys. The trio has white backlighting, which serves it well in the dark.

The ejectable dual-SIM tray is alone on the left, while the right side of the Mi 4c has the glossy silver volume rocker and the Power/Lock key.

The left and right sides of the Mi 4c

The top of the Mi 4c houses the 3.5mm audio port and the IR blaster, while the bottom has the new USB type-C port and the primary mic.

The top and bottom of the Xiaomi Mi 4c

Finally, the 13MP rear camera is at the back, accompanied by a dual-LED dual-tone flash. The loudspeaker grille is also around, towards the bottom.

The back of the Xiaomi Mi 4c

The rear panel can't be removed, which means you can't replace your battery whenever you want.