Xiaomi Mi 6 has most specs revealed by GFXBench

As we wait for the Xiaomi Mi 6 to become official at some point this month, someone in possession of a prototype decided to put it through the paces of GFXBench for Android. Thankfully, that has resulted in a pretty complete list of specs of the device becoming public in the benchmark's database. GFXBench refers to it as "Xiaomi Sagit" but the chipset it has clearly reveals that this is indeed the Mi 6 we're talking about. 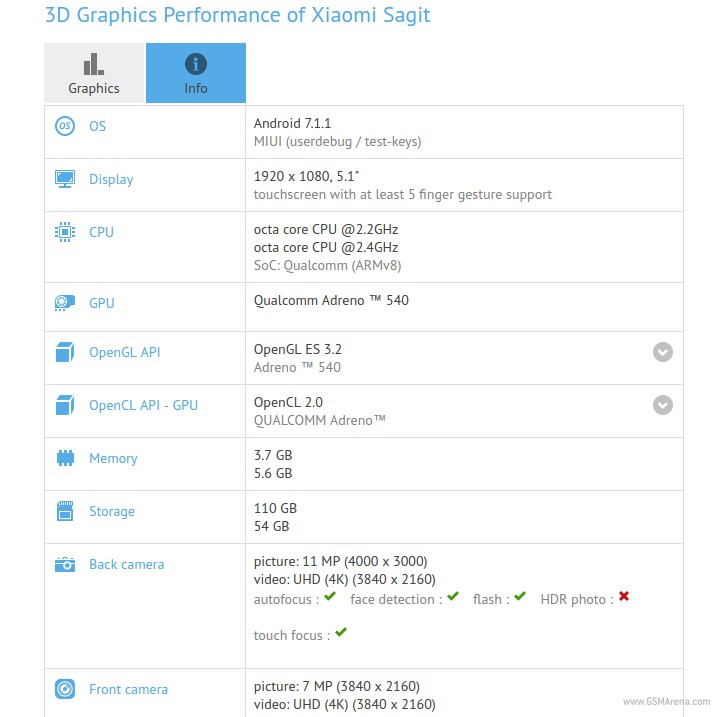 The phone is unsurprisingly powered by Qualcomm's Snapdragon 835 chipset, aided by either 4 or 6GB of RAM - depending on which particular model you pick when the Mi 6 goes on sale. Similarly, internal storage is either 64GB or 128GB. The handset runs Android 7.1.1 Nougat underneath the MIUI skin.

The Mi 6 is shaping up to be only the third smartphone to be announced as sporting the Snapdragon 835 chipset. That would be quite a feat for Xiaomi, since it would mean it's managed to one-up the likes of LG and HTC, for example. Still, it remains to be seen when it will actually become available, since the Sony Xperia XZ Premium was the first S835 device to be outed, and yet the Samsung Galaxy S8 will arrive before it.

Lol how ridiculous. So I guess you only look at your own pictures on your own phone? You never share photos with others who might look at them with screens that are higher than 1080p? How sad... And like you said, you'd only be able to see a diffe...

I had Mi3 redmi note 3 mtk redmi note 3g (first redmi note phone) and Redmi pro... Ui is just well equiped if you or mom or dad aunt or whoever know english... when you unlock dev options in security app you have to allow factory root permision so yo...