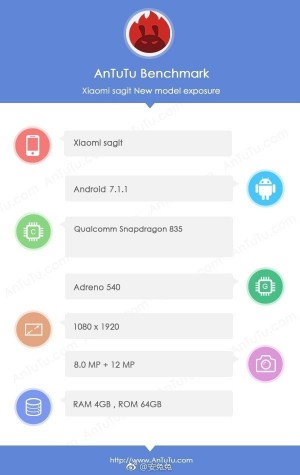 Xiaomi may take the wraps off its next flagship smartphone as soon as tomorrow. We told you about this development a few hours ago, and it would certainly be an odd introduction if it pans out, because the outing of a new product tomorrow was only confirmed by company execs today. Usually invites for such events are sent out at least a few days in advance.

Anyway, the Mi 6 is continuing to hit various benchmarks in the meantime. We've seen it in the GFXBench database last week, and today it's been spotted at AnTuTu. The prototype that got put through the paces of the benchmark managed to score around 170,000 points, which is certainly a big improvement over the 131,000 that the Mi 5s was able to achieve.

That's in no small part to do with the fact that the Mi 6 uses the Qualcomm Snapdragon 835 chipset, like the Samsung Galaxy S8 and Sony Xperia XZ Premium. AnTuTu's information listing for the Xiaomi handset calls it by its codename Sagit, which is in fact the same moniker we've seen at GFXBench. That SoC it has makes us certain it's the Mi 6 in disguise.

As you can see from the image above, AnTuTu confirms that at least one model of the Mi 6 will arrive with 4GB of RAM and 64GB of storage, a 12 MP main camera, and an 8 MP selfie shooter. It has a 1080p touchscreen and runs Android 7.1.1 Nougat underneath the latest version of MIUI.

All of these details have previously been outed by GFXBench, so you can pretty much bet on them being the final specs for the Mi 6 - especially if we're mere hours away from its unveiling. That said, this version with 4GB of RAM and 64GB of storage is likely to be the entry-level option. We should see some more variants with more memory and storage, which will command a price premium as you'd expect.