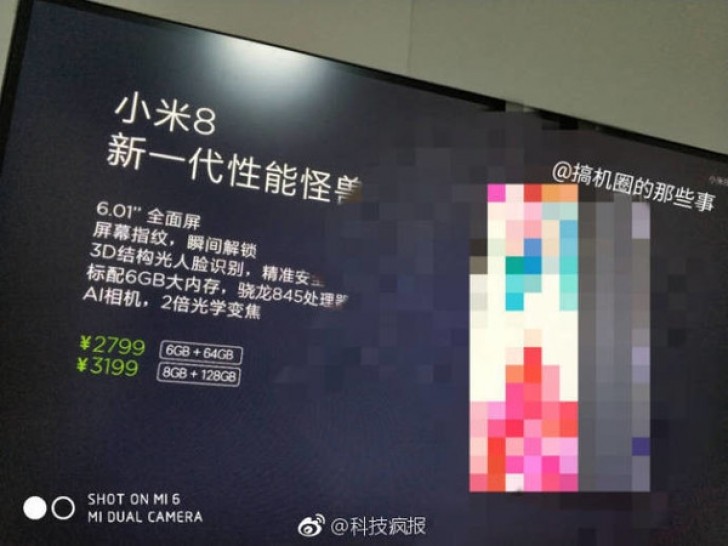 The image also reveals the phone will have a 6.01” screen and 3D face recognition, similar to the Face ID implemented by Apple in the iPhone X. The chipset will be Snapdragon 845, which was already confirmed back in December by the Xiaomi CEO Lei Jun at a Qualcomm conference.

The manufacturer is jumping on the AI bandwagon with its flagship as well and will equip the Mi 8's dual camera with the tech that recognizes over 200 scenes, including 12 different portrait modes that we saw initially in the Xiaomi Mi 6X' debut last month. An alleged video also suggested the phone might come with an under-display fingerprint scanner.

The Xiaomi Mi 8 was initially expected to arrive tomorrow in Shenzhen, China, but latest sources point to May 31 as a launch date.

The Mi was the first company to launch Mix phone version which Apple copied and added some AI features as the Apples A 11 bionic processor supports AI and Honor created the kirin970 to compete with Apple but there is no global chip available with AI ...

No, Apple didn't start it. Apple made it fancy and trendy. So, yes, they are copying Apple.

Who started the notch did apple?? NO så stop saying they are copying its not the case