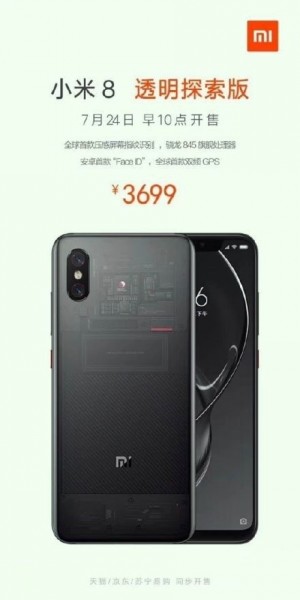 Xiaomi launched three flagship phones back in May - the vanilla Mi 8, the lite version called Mi 8 SE and the powerhouse variant with a see-through back called Mi 8 Explorer. While the first two have been on the shelves since early June, the third device is yet to arrive on any market, but at least it showed up on TENAA last week.

According to a poster, the Mi 8 Explorer will finally launch on July 24 in China at 10 AM local time. The phone is listed with a price tag of CNY3,699 (about $555/€473), which is CNY100 off from the initially announced cost of the device at the unveiling.

The image, however, does not come from official Xiaomi communication channels, casting a shade on its authenticity. Still, with Xiaomi getting the last needed certifications lately, it was always likely that the most capable of its flagships is about to hit the stores shortly.

we need this phone in america!!!

The phone is perfect but every person have different taste.

Man nope but base version is craaaaaaap due to only 64GB which is limited disk space and no SD card slot so we speak about 256GB model and in my country 86 different shops sells this 256GB version with price range from 1100 to 1438 euros. So rather M...