We’ve been hearing rumors of an upcoming Mi 8 smartphone for quite some time and we even saw some specs leaked. The phone with a model number M1808D2TE will be unveiled in Chengdu on September 19 at the official event. We will also learn the actual name of the smartphone - we heard anything from Mi 8X through Mi 8X Youth to Mi 8 Screen Fingerpint Edition. 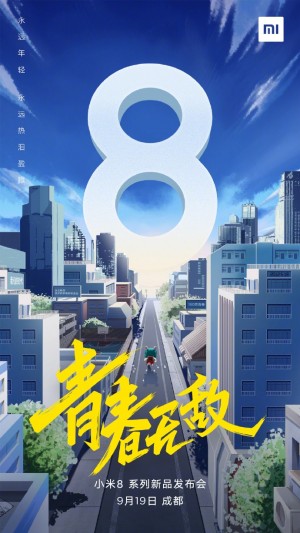 The official invite from Xiaomi

The upcoming phone might have a tall 6.26” display with Full HD+ resolution and Snapdragon 710 chipset. The dual camera on the back likely will have a 12 MP primary sensor, while the selfie shooter is listed as 24 MP by TENAA, the Chinese regulatory.

The phone is expected to arrive somewhere inbetween the vanilla Mi 8 and Mi 8 SE. Some leaked images suggested a lack of physical fingerprint scanner on the front or back and it might make its way under the screen, but latest TENAA photos gave another twist of the whole Mi 8 (insert moniker here) mystery. Looks like everything will be clear once the device arrives next week.

Mi8 can be found for 365 usd. I'm wondering what more can they offer?? Hate to say but Xiaomi's second iteration 'flagships' like the mi5 and mi5 plus did not have a good record of updates. For better support stick to the main releases of the years.

Mi A3? Hope this one will get NFC for global release

would be nice. will not happen sadly.