The Xiaomi Mi 9T is arriving on June 12, and while the company hasn't divulged much about this smartphone, we expected it to be a re-branded Redmi K20. Now, the smartphone has appeared on Geekbench, and its listing confirms that.

The benchmark database reveals that the Mi 9T will come with Android Pie, 6GB RAM, and an octa-core processor having a base frequency of 1.8GHz. The motherboard section doesn't reveal the name of the chipset and says "davinci" instead. 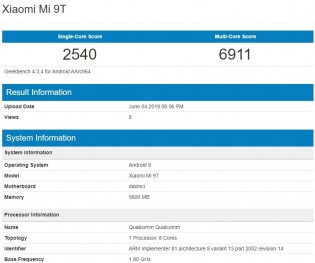 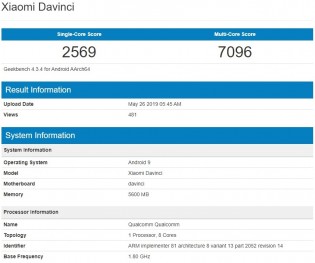 The Redmi K20 had also appeared on Geekbench with "davinci" as its codename and a 1.8GHz octa-core processor coupled with 6GB RAM.

The Mi 9T is expected to be joined by a Pro model and going by the above logic, it's safe to say that it will be a re-badged K20 Pro. You can check out the detailed specs of the K20 duo here to know what to expect from the Mi 9T and its Pro variant.

Am i the only one who thinks the back of the phone shown in the article looks nothing like the back of k20? Here, the back camera is on the left side.

The Mi 9T and Redmi K20 don't have SD855. The Pro versions do which aren't in the benchmarks.

its the non pro