It seems like the Xiaomi Mi A2 just can't be contained. A month before the company even scheduled the event, a Spanish YouTube channel published a detailed hands-on video, later taken down.

And since last week, the device has been popping up in online stores all over the world. First, it was Poland, then it was Romania and now, a Chinese and a UK store have listed the device for pre-order with some immediate price cuts.

The Chinese OEM will be holding an event three days from now on July 24 in Spain and a new Mi A2 Lite variant will be tagging along as well. 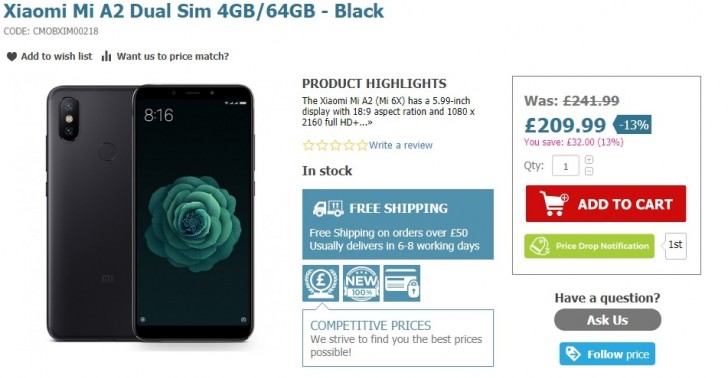 But strangely enough, that didn't stop all the retailers listing the Mi A2 for sale and the last two stores appear to have the best deals for now. The UK eGlobal Central is selling the device for £209.99 ($276) (13% down) while the Chinese Banggood store is offering the handset for even less - $229.99 with 15% off. Both listings are for the 4GB/64GB memory configuration.

MI A2 mobile is best mobile in this year,good feture on this mobile

And NO microsd card slot as well.