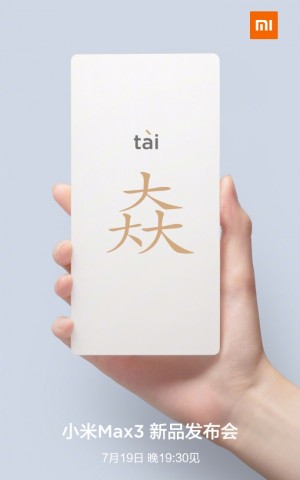 The next Xiaomi phablet will be called Mi Max 3 and it has been appearing on various places over the internet for the last two months. Ten days after Lei Jun posted on Weibo the retail box of the phone, the company's official profile took it to the Chinese social media to announce the launch date of the device. The Xiaomi Mi Max 3 is arriving on July 19 with “large screen and battery”, according to the post.

The phone already popped up on TENAA, revealing most of its specs. There will be an octa-core CPU, clocked at 1.8 GHz, but the exact chipset is yet to be confirmed.

The 6.99" LCD screen will have Full HD+ resolution and an 18:9 tall screen. There is no notch onboard, but the top and bottom bezels are way too thin for any hardware buttons, so the fingerprint scanner found its way on the back panel, as usual.

The dual-camera setup will have a main 12 MP snapper and a secondary 8 MP sensor, while selfies will be 5 MP. Mi Max 3 will likely arrive with MIUI 9.5 out of the box, based on Android 8.1 Oreo. Xiaomi is promising a huge phone with a huge battery - 5,400 mAh, to be precise.

The device is expected to cost around CNY1,699 or somewhere in the ballpark of $250/€220. There are at least three RAM and three storage options, so we will most likely have plenty of prices for different versions aimed at multiple markets.