Probably the most noteworthy new addition to the Mi Mix 2s is its dual camera setup. Xiaomi actually likens it a bit to the one on the Mi 6 flagship. There are two 12MP snappers - a regular f/1.8 wide one and an f/2.4 telephoto. 4-axis OIS and dual pixel autofocus are also part of the package. Functionality, however, is about where the similarities between the two devices end.

The Mi Mix 2s camera experience is built around the Sony IMX363 sensor. It's the first time Xiaomi is giving it a go and despite what the numbering system might suggest, it is actually a good deal better than the IMX386, powering the regular Mi Mix 2, as well as the Mi 6. It features bigger pixels at 1.40 µm, compared to 1.25 µm and also has the benefit of Dual Pixel autofocus. In theory, that should result in more light, less noise, as well as better focus in low-light conditions.

Unfortunately, snagging some samples from the Mi Mix 2s is not possible at this time due to the early software of our unit. On paper, this is Xiaomi's most powerful smartphone camera setup to date, so we can't wait to put it through the hoops. 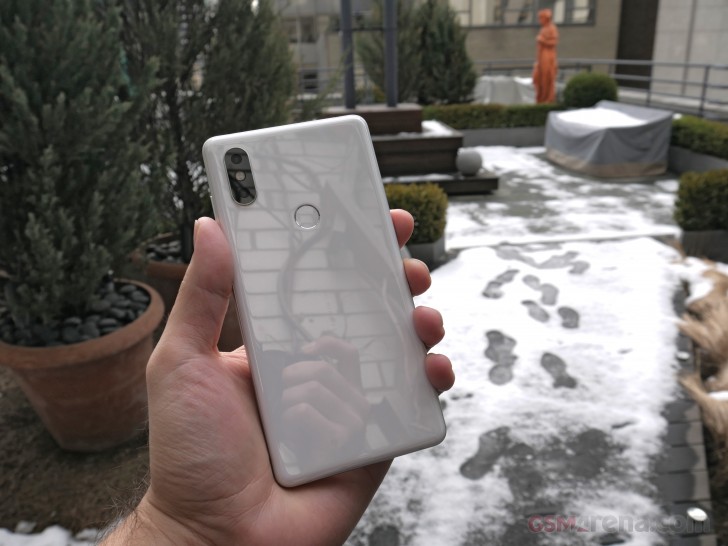 Plus, even though the hardware on the Mix 2s is final, Xiaomi is still hard at work on MIUI for the device. One particular area of improvement we should expect in the final ROMs is a new camera AI. The company's camera engineers are promising better edge detection and consequent improvements to portrait shots. There's also multi-frame NR for stacking multiple images and reducing the noise levels.

Also, through rigorous model training and analysis of millions of photographs, the new MIUI beauty mode should be smarter than ever. Better equipped to recognize faces and make more natural and realistic adjustments to their appearance. Besides improving portraits and selfies, the AI should be able to detect 206 scenes, across 25 categories and adjust camera settings accordingly. Dynamic bokeh effects are also part of the feature list.

Stay tuned for more details in the full, in-depth review of the Xiaomi Mi Mix 2s. This is really shaping as a device to look forward to and we can't wait to put it though our test gauntlet.

We had a chance to take some camera samples during our second session with Xiaomi. Unfortunately, we were indoors this time and didn't have a lot of great opportunities to take pictures. Also, portrait mode wasn't working properly, so we won't be publishing those samples.

Regardless of that, we like whatever little we got. The fact that our images were entirely indoors allowed us to check out the low-light performance of the camera and, despite the early nature of the software, the images looked really good. There is a really nice noise reduction algorithm that works hard but not in an obvious way so although the images are cleaned up quite well there isn't a lot of that telltale smearing and softness. The colors in particular were excellent and just bursting through the image, even though the high ISO nature of low-light shooting often means the color information is the first thing to take a hit.

Xiaomi Mi Mix 2s camera samples with and without HDR

What we weren't too keen on was the HDR mode. It made some of the brighter images slightly worse by dropping the contrast and flattening the image and in the low light scenarios it just made the image incredibly dark. We suspect it is one of those things that will need fixing in software.

Overall, though, we like what we are seeing so far from this camera. Xiaomi told us that this is the best camera they have ever put on a phone and it shows. We would definitely be interested in exploring this aspect in more detail when we get the final retail unit.