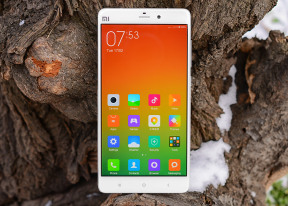 The retail box is no different from the packaging of recent Xiaomi phones. Boxes are all made out of recycled paper and look quite pleasantly simple. As for the Mi Note's accessories, there is nothing out of the usual: an A/C adapter, a microUSB cable and the usual paperwork.

If you order the Xiaomi Mi Note at XiaomiShop.com, you'll also get a flip leather case, a glass screen protector, a USB OTG adapter and a touch pen at no extra cost.

The Xiaomi Mi Note measures 155 x 77.6 x 7mm and weighs about 161g. The device is curved at the back and actually appears even slimmer. The Xiaomi Mi Note is pretty much as big as the 5.7" Galaxy Note 4, but thinner and lighter.

Xiaomi seems to like the Mi 4 design and its reception, so the company decided to enhance it further and apply it on the Mi Note. Scaling to phablet size has even worked in the Mi Note's favor. The front seems pleasantly familiar with the thin screen bezels and the Mi logo in the top right corner. The frame is once again cast out of metal, while the rear panel is all glass.

The 5.7" display is covered by a piece of Corning Gorilla Glass 3, with the so-called 2.5D effect along the edges. The curve at the rear is more prominent and you'll definitely feel it in your hand. The carefully curved edges make the Xiaomi Mi Note look a lot thinner than it actually is, beautiful. Somewhat like a Galaxy Note Edge, but reversed.

Xiaomi Mi Note next to Galaxy Note 4, iPhone 6 Plus and OnePlus One

The side frame is all metal, just like on the Xiaomi Mi 4. It really stands out this time because it gets even thinner along its taller sides. The Mi Note might look like a regular smartphone up front, but its back is what makes a really special. Actually, even though it's button-less (capacitive only), the front is more than distantly reminiscent of Samsung's Note.

While the Xiaomi Mi Note looks great, its handling is far from perfect. The phablet is solidly built and all pieces tie together well, all curved details almost completely compromise the grip. Handling the Mi Note, even though pleasant to touch, is far from secure - a device so slippery must be handled with extreme caution at all times.

The slippery back opens the Mi Note to an even bigger issue - the device must always rest on perfectly level surfaces, or it simply risks gliding off. It is one of the most slippery devices we've had around in a long time and we were extra careful.

The Xiaomi Mi Note's controls are pretty much the same as what we found on its Mi 4 predecessor. Almost the entire front is occupied by the 5.7" IPS screens with impressively thin bezels. Above the screen we find the earpiece, with a couple of sensors and the 4MP UltraPixel (sadly fixed-focus) selfie camera.

A peek above and below the 5.7" display

Xiaomi is sticking with the capacitive controls instead of wasting precious screen real estate. The trio has been updated with the new mandatory arrangement required by Google - Task Switcher, Home and Back key. A longer press on the Task Switcher key will bring any contextual menu though.

The 3.5mm audio jack is on top of the Mi Note as is the secondary noise-cancellation microphone, used in both calls and stereo audio recording when shooting videos. The bottom has the massive loudspeaker grille, which also houses the primary microphone, and the microUSB port.

The top and bottom sides of the Xiaomi Mi Note

The ejectable SIM tray is alone on the left side. It supports one micro-SIM card and one nano-SIM. It's interesting how Xiaomi accommodated such a big tray for the SIM cards, but couldn't find a place to put a microSD slot. We like Huawei's and Oppo's approach, where you can choose what to use the second slot for: a microSD or a nano-SIM card.

The SIM bed on the left

Xiaomi Mi Note's right is where the volume rocker and the power/lock key are. Both are thin, made of metal and provide excellent tactile feedback.

The volume rocker and the lock key are on the right

The back of the Xiaomi Mi Note