Xiaomi launched the first flash sale of its Redmi Note phablet in India earlier this week, and that went incredibly well. Since the Chinese company has gotten us used to selling only one model at a time, we weren't expecting any other Xiaomi smartphone to become available for purchase soon.

But it looks like things have changed, as Xiaomi is now getting ready to sell the Redmi 1S once more in the subcontinent. The sale will happen on December 8, and another new thing is that you won't have to pre-register in order to buy it. 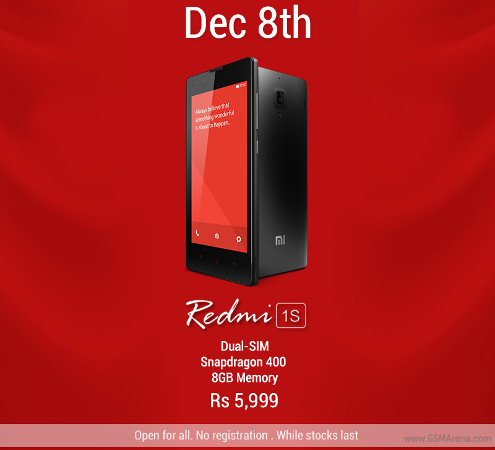 With previous flash sales, you needed to do that a few days before the actual day when you ordered the device. Not this time, though. The Redmi 1S will be up for grabs for everyone, with no registrations. Of course, it will only be available "while stocks last", and we have no indication of how many units Xiaomi has prepared.

The Redmi 1S will be offered on a Monday, unlike all of the company's previous sales which have happened on Tuesdays. On the other hand, the following day, which is Tuesday, December 9, will see the next flash sale of the Redmi Note - which you have to pre-register for. So it seems to be a sort of special one-off thing, this December 8 sale of the Redmi 1S.

The handset in question comes with dual-SIM functionality, a Qualcomm Snapdragon 400 chipset, and 8GB of built-in storage. There's also 1GB of RAM, a 4.7-inch 720p touchscreen, and a 2,000 mAh battery.

Grab it Guys it's awesome

Flipkart is playing marketing game, they have lot of stock ,just making hype.

Redmi 1 S is excellent phone and Flipkart Services are good