After passing through TENAA, the Xiaomi Redmi 8 has surfaced on China Telecom’s website, indicating that it’s very close to release. It also got the go-ahead from the Ministry of Industry and Information Technology (MIIT).

The carrier and MIIT were kind enough to post these photos of the phone on a white background, instead of TENAA’s usual blue. By the way, we’ve seen hands-on photos before. 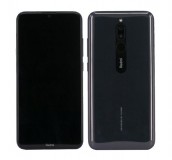 Anyway, the Redmi 8 will have a 6.21” 720p+ screen wrapped in a plastic body available in Red, Green, Blue and Black. The chipset, likely the same Snapdragon 439 as in the Redmi 8A, will be hooked up to 4GB of RAM and 64GB storage – double what the A-phone has (lower capacities will also be available, though).

The camera department is improved as well with a 12MP main and 2MP depth sensor, along with an 8MP selfie camera. The phone will have a large battery, 5,000mAh, charged over USB-C. There’s also a 3.5mm headphone jack.

they are following samsung's strategy of flooding the market with ranges upon ranges of devices in hope to stimulate sales.

Euhm.. SD425 isn't that an error. The redmi 7 has a SDM632 which is much better than the SDM439. From the specs alone IMHO the redmi 8a isn't a sufficient upgrade over the 7 and it's even worse compared to this Redmi 8. While between the r...