The Redmi 8A is a large, robustly built phone with a modern, contemporary design.

The front of the phone has an edge to edge Gorilla Glass 5 panel covering the 6.22-inch display. Above the display is a notch for the camera and the earpiece. At the bottom, there is a sizable bezel. The display has some aggressively cut corners on all sides. 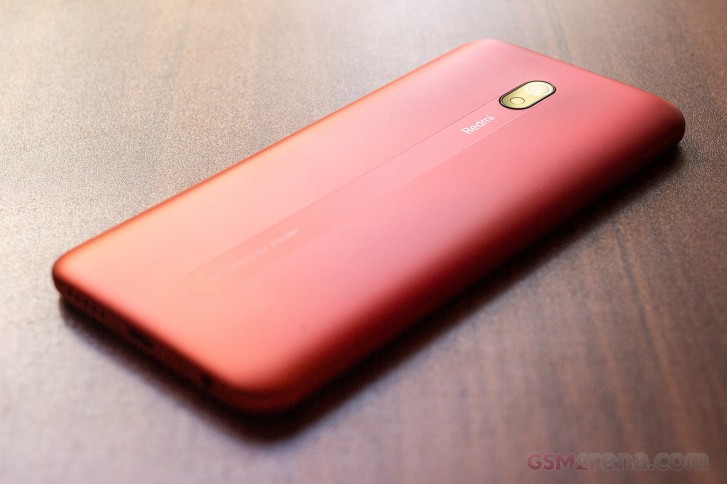 On the right side of the phone are the power and volume buttons. The buttons have a firm, tactile feedback with absolutely no play. On the other side is the SIM tray, which houses two nano-SIM cards and a microSD. As usual, Xiaomi does not label them, which is annoying. Just so you know, the middle slot is SIM 1, while the outer one is SIM 2. The SIM tray has a small rubber gasket, which indicates some attempt to make the device water and dust resistant. The tray sits perfectly flush with the phone when closed, but the color of the tray doesn't quite match that of the phone's body.

The top and bottom of the phone are perfectly flat, which means you can stand the phone on either side. This seems to be the new look for Xiaomi for 2019, as some other devices launched this year also had this design element. The bottom of the phone has a headphone jack, microphone, USB-C port and a single loudspeaker.

The back of the phone features a unique finely striped pattern, similar to spun metal, but it doesn't go in a circular pattern but rather a wave-like pattern around the back of the phone. Xiaomi calls this Aura Wave Grip Design and claims it adds grip to the device. We found the pattern to be too fine to offer any additional grip as to the hand the phone's surface almost feels contiguous, and since it is smooth plastic, it still feels quite slippery. Xiaomi's claims of fingerprint resistance also didn't quite hold up, as even though the phone isn't glossy, the subtle striped pattern does tend to gather dust and smudges that is hard to clean off. Still, when the phone is clean, the pattern looks quite nice.

Another cool thing about the back of the phone is the color. While the Midnight Black and Ocean Blue variants have the same color throughout, the Sunset Red option we had has the color starting as orange at the bottom of the phone and gradually turning a deeper shade of red as it moves upwards. This, coupled with the striped pattern, creates a rather striking effect as different parts of the phone glow with different intensity of red depending upon how light hits it. 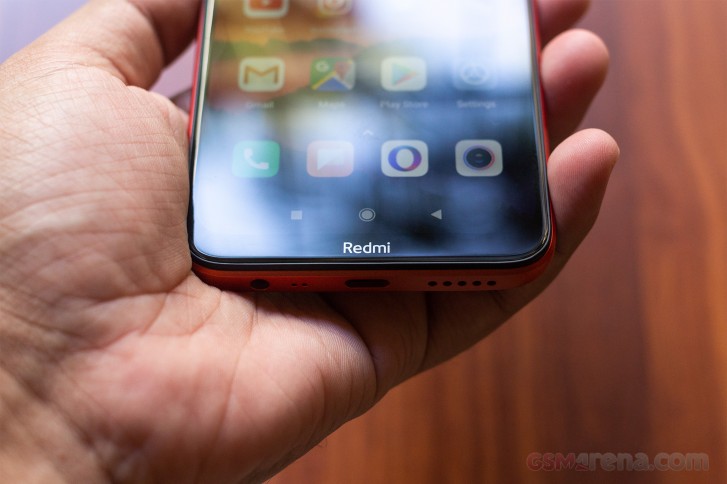 The Redmi 8A is a reasonably large phone. At 188g, it's also quite heavy, which may turn some people off. However, the phone has a sturdy, durable feel to it despite the prominently plastic body. There is also a splash-resistant nano-coating by P2i, so the phone should survive light splashes of water. For the price, this level of build quality is extremely impressive, and there's nothing cheap or offensive about the design and build of the Redmi 8A. The only eyesore is the Redmi logo on the front bezel, which is unnecessary. We'd prefer it if Xiaomi didn't use the front of the phone as an ad space because the software comes with enough ads as is. Apart from that, the phone is well designed and really well built for the price.

On paper, the display might not seem like much. The pixel density is quite low for 2019. However, in practice, the resolution is perfectly adequate. Text and images looked reasonably sharp, and even videos looked really good on the screen. When we say videos, we are talking about our sample files, which are much higher quality than what you'd find on streaming sites. YouTube can only go as high as 720p on this phone, and at that resolution, the compression is extremely high, resulting in a soft blurry image. Instagram is another problematic app, as it loads a much lower resolution image on devices with lower than 1080p resolution. All of this makes the display on the Redmi 8A look worse than it is. 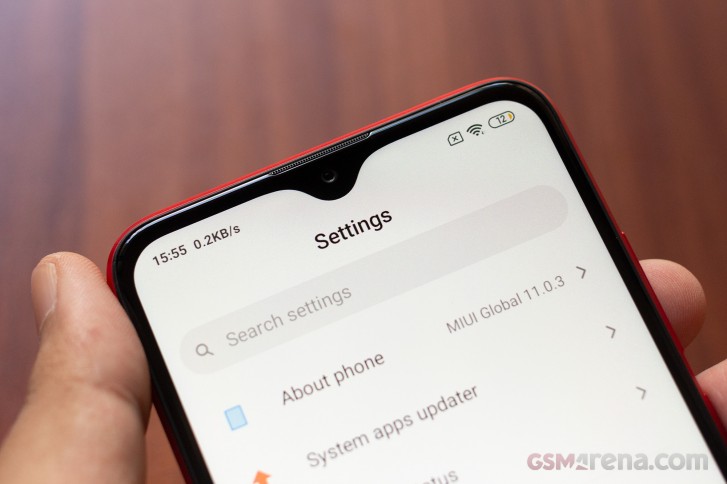 The point here is that what you need is better pixels, not more pixels. The actual quality of the panel on the Redmi 8A is quite good, especially for the price. Due to this, when supplied with quality content, the display performs well. The only complaint we had with it is the brightness, which is not that high even when turned up all the way. Even when using the phone indoors we found ourselves continually reaching to turn up the brightness, only to find out it was already at maximum setting.

Apart from that, however, in terms of colors, contrast and viewing angles, the display on the Redmi 8A performs well.

The Redmi 8A has a 5000mAh battery. We didn't get to do our usual battery life testing, but in our usage, the phone had excellent battery life. With regular use, the Redmi 8A easily lasts a day and a half on a single charge. It's just one of those phones where battery life anxiety stops being a thing and you rarely have to spare a thought for running out of charge before the end of the day.

The charging process is a bit slow with the supplied 10W charger, but not as much when you consider the size of the battery. Half an hour of charging gives you about 25% battery, while an hour of charging gives about 45% battery. A full charge takes about three hours. We found it best to charge the phone overnight, as the phone had enough battery life to go through an entire day.

The Redmi 8A does support 18W fast charging, but we found this to be rather unnecessary. When tested with the 27W Xiaomi charger, the Redmi 8A charged about 30% in half an hour, 50% in one hour, and 100% in two and a half hours. The improvement in charge times is not worth investing in a faster charger, and you're better off charging your phone overnight, at which point the charging speeds become irrelevant.

The Redmi 8A has a single loudspeaker on the bottom. The speaker doesn't get too loud and sounds a bit reedy, but the audio is crystal clear with no distortion, even at maximum volume. 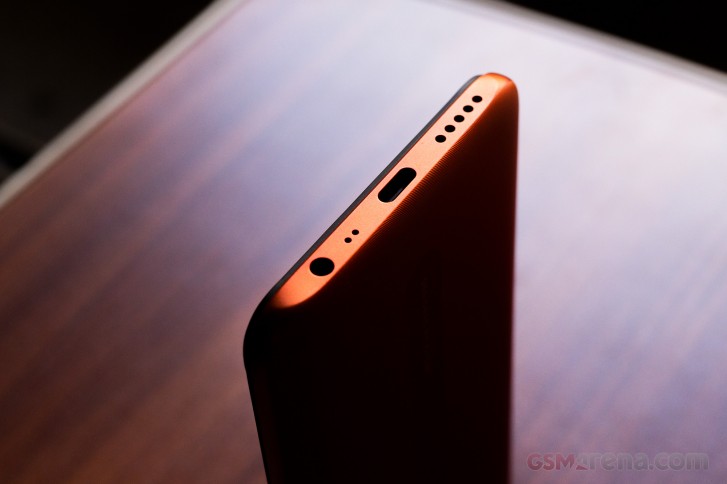 The phone also has a headphone jack, which also provides clean, good quality audio that gets sufficiently loud.