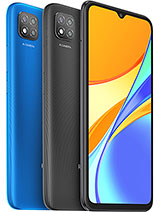 anonymous, 26 Jul 2021The phone is great and all. Have been using this phone for almost 1 year now. It's hardwa... moreasphalt 9 doesn't need 64 bit kernel. i know because it ran on my 32bit Xperia Z3. asphalt 9 requires widevine L1 and redmi 9c has widevine L3 (which is lower than L1)

Munaknow, 03 Aug 2021You are the first person I had to said that this phone is 35bit, according to my research this... moreredmi 9c actually runs on a 32bit operating system despite the cpu being 64bit capable.

anonymous, 26 Jul 2021The phone is great and all. Have been using this phone for almost 1 year now. It's hardwa... moreYou are the first person I had to said that this phone is 35bit, according to my research this phone (xiaomi Redmi 9c) whose 64bit. The phone issues is the gpu.

The phone is great and all. Have been using this phone for almost 1 year now. It's hardware matches it's price. Used it on gaming, school works, casual stuff and the phone does not fail me.

The only problem that is the MIUI 12(Operating system) itself. Making the phone slower because of its flashy animations, bloat wares, ram management. The worst part of it is they made our Redmi 9C 32-bit. It's hardware are 64-bit capable, just the OS itself is the problem. They made it in 32-bit because MIUI 12 is resource demanding. Just booting up the phone + bloat wares takes up to 70~80% of our RAM(1500/2700~1900/2700) and doesn't go down. It even uses half of the SWAP file(1500mb) just to let the us see that MIUI is not eating the RAM and the phone is fine.

Having a 32-bit Android limits the hardware from gaming(and other things). Heavy games like CODM and PUBG requires a 64-bit phone(both hardware and OS) to run in medium~high graphics.
And some popular games like Genshin Impact, Asphalt 9 requires a 64-bit kernel.
If you want a budget entry level phone that can run *most* heavy games, I would recommend buying Oppo's Realme C15. With the same CPU, it can run 64-bit games. And with a little addition to Redmi 9C's price, you could get more RAM, storage, Battery capacity, 18W charging, and some additional sensors.

I've been using this phone as my daily driver since January 2021band I do not have any problems at all. Good value for money, battery life so good can last 2 days and can ran games like COD mobile and PUBG though on low settings but smooth and nice without any problems. But all in all its a great entry level phone. It is updated regularly now I'm on my June security patch

Vhicks, 26 Jun 2021Why is my screen freezinggreat phone people are complaining because they prolly did something to it

Kizzy, 16 Jul 2021Anytime I play music with my redmi 9c and the screen sleeps, the music cracks. It's annoy... moreIs this the only issue you have with this phone?

TheoS, 12 Jul 2021So what's the name of the company and where are they based?Xiaomi. China.

Anytime I play music with my redmi 9c and the screen sleeps, the music cracks. It's annoying because my phone screen has to be on the entire time. I can't even use earphone in peace cos of this problem

Anonymous, 09 Jul 2021 I Bought this mobile before 4 month but after two month is hung up and screen also heated up... moreSo what's the name of the company and where are they based?

I already use redmi 9c around 2week. I want ask.
1. How to set my own lockscreen n home screen. I meant from my gallery. Bcoz i try to set but every time i set it will back to classic.
2. 5000mah battery can standby for how long?? Bcoz my battery can standby only 1day n half.
Tq

I have redmi 9C MIUI Global 12.0.14 stable mobile.can you tell me solution of the screen off during the call?

is it have fingerprint function

Lobos, 28 Jun 2021Well have had the phone for a month now its not acting up or anything if you have a problem se... moreI've had the 9C 2GB version for 7 months now . Used extensively and it works hard every day. An absolute joy to use. ZERO issues. Thank you Xiaomi for this brilliant, affordable smartphone.

Well have had the phone for a month now its not acting up or anything if you have a problem send it back to your seller. this phone is good, better than i expected i didnt buy it for the camera so you understand the battery life is impressive. I'll make an annual review just to show how things are in a year's time.

Comment section ends up discouraging people from seeing the truth

Why is my screen freezing