The Redmi Note 3 is the first Redmi phone with a metal body. Most of the body is made out of aluminum, with plastic caps at the top and bottom and glass on the front. This gives the phone a decidedly premium feel, which is quite extraordinary as this is still a Redmi device.

The Redmi Note 3 follows Xiaomi's minimalist design language. The front is dominated by the display with relatively narrow bezels that don't occupy too much of your visual space.

Above the display are the earpiece, ambient light sensor, proximity sensor, front facing camera, and a notification LED that's only visible when it's illuminated. Below the display are the backlit navigation controls. Considering how many phones these days drop the backlighting these days, it's good to see Xiaomi not stoop to inane cost-cutting.

The front is framed by a thin chrome-finished edge that is painted in the same shade as the rest of the phone. From there, the sides curve inwards, giving the sense of the phone being thinner than it is.

Xiaomi Redmi Note 3 - what's on the back

On the right are the power button and the volume rocker with polished chamfered edges, all very well located and work well, too.

On the other side is a tray that holds either two SIM cards (mini + nano) or one SIM card and one microSD card. The tray sits perfectly flush with the body and for once the color matches the rest of the phone, something some companies really struggle with. On the top is the headphone jack, secondary microphone, and the IR sensor. On the bottom is the microUSB port and the primary microphone.

The new 16MP camera • the loudspeaker

On the back, we see the 16 megapixel camera lens up top with the two-tone dual LED flash below. Below that is the fingerprint sensor. The cutout for the camera and the fingerprint sensor are exactly the same size and have a polished, beveled edge. Below is the loudspeaker with a tiny lip that raises the bottom so the speaker doesn't get blocked completely. Although it is better than the back being completely flat, the speaker does lose some of its edge when the phone is kept on its back. Not to mention the fact that the back is perhaps the worst place to put the loudspeaker.

Physically, the phone is large, considering it has a 5.5-inch display. Having said that, it isn't enormous, and the clever designing makes it feel smaller than it is. The build quality, fit and finish is top-notch, however, and it is very easy to forget this isn't a high-end smartphone. We appreciate the way the metal and the plastic parts fit, and the subtle detailing all-around. You can tell some effort went into designing the phone, despite its low price point.

The Redmi Note 3 has a 5.5-inch, 1920 x 1080 resolution LCD. The display has a handful of modes you can set it to. There is the Standard mode, then Increased contrast, which boosts colors and adjusts display contrast based on the displayed content, and Automatic contrast, which adjusts the dynamic range of the display based on the ambient light, making the darker areas of the image brighter under bright light to make them more visible without increasing the backlight. You can also adjust the color temperature by setting it to standard, warm, or cool. 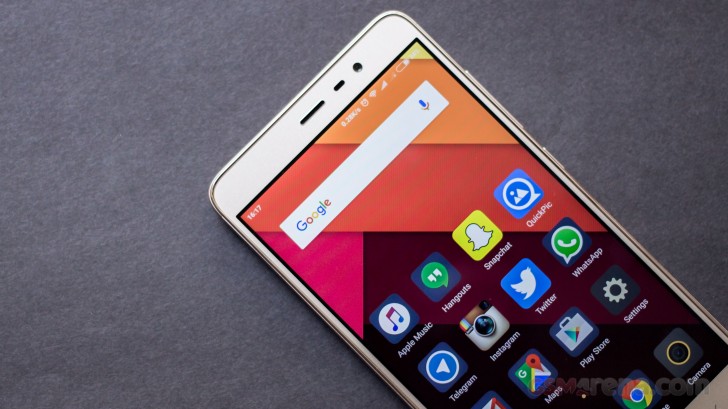 When set to the Standard white balance and contrast mode, the display on the Redmi Note 3 does well. The colors are slightly muted and the white balance is slightly cool but apart from that it's a nice display to look at, with good sharpness, brightness, contrast, viewing angles, and sunlight visibility. The display can also get ridiculously dim, to the point where you have to keep the brightness slightly above the minimum even in a completely dark room. Overall, the Redmi Note 3 has a pretty good display, and easily one of the best you can get in its price range.