Xiaomi Redmi Note 4 was a bestseller during its multiple flash sales and even managed to smash some records. But this is a phone that first appeared in August 2016, so it’s time for the successor Redmi Note 5 to step in. And now the first live photo of the new phone leaked on Weibo, along with some specs. 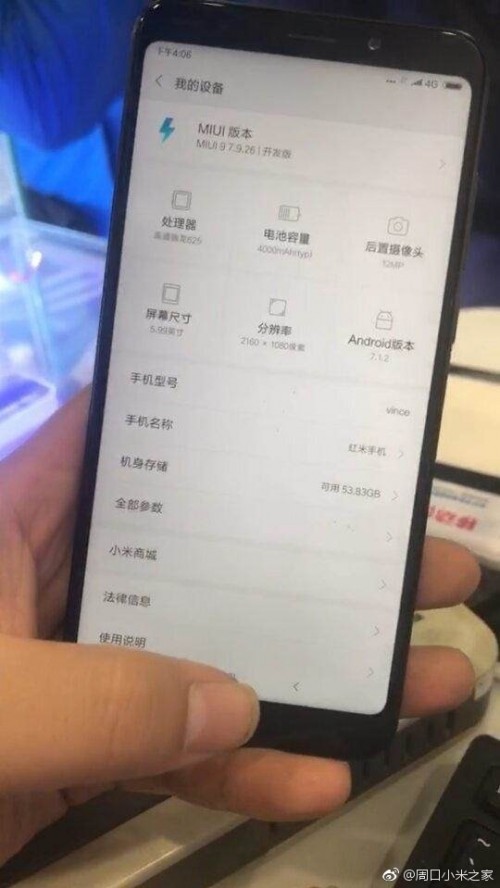 According to the image, the Redmi Note 5 will have Snapdragon 625 chipset. The screen has the trendy 18:9 ratio, a 5.99” diagonal and Full HD+ resolution.

The phone reports 54GB of storage available, meaning that it's a 64GB unit. There is at least one camera with 12 MP sensor and the whole setup runs on Android Nougat 7.1.2. The battery has 4,000 mAh capacity and the fingerprint scanner is most likely on the back.

The image also reveals only one selfie camera, while the volume rocker and power buttons are still laying on the right side, like in the Redmi Note 4.

Is it possible that this is actually the Redmi 5 Plus, that has been announced to come with the regular Redmi 5 on 7th dec? I mean SD 625 is already confirmed for the Redmi 5, and the Note series always had a stronger SOC

Xiaomi should use snapdragon 660 instead of 625. Already they have launched 2 phones with SD 625. One more with new variant. Omg!