The Xiaomi Redmi Note 6 Pro is not official yet, but that has never stopped a quick hands-on. Yes, another one.

The video shows the full retail package and everything, the phone is fully working, so there are no obstacles to the phone’s launch (which has its certifications too) other than Xiaomi’s marketing strategy. 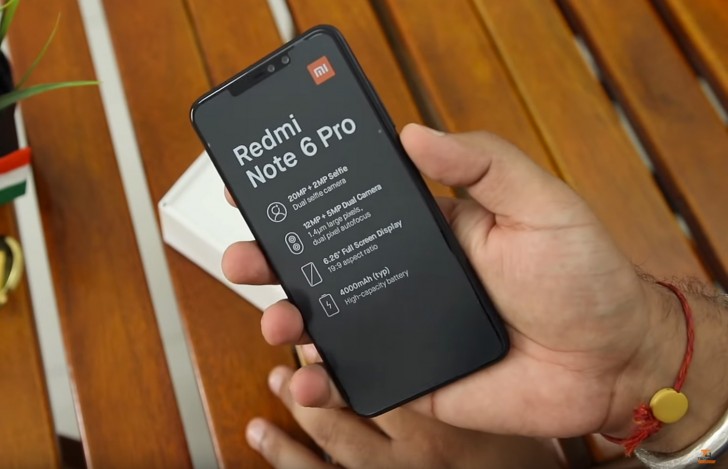 The phone has a 6.26” screen with 19:9 aspect ratio (1080p+ resolution). It is indeed powered by the Snapdragon 636 chipset as rumors predicted, but this particular model has the modest 3GB of RAM and 32GB storage. It runs MIUI 9.6 based on Android 8.1 Oreo.

The Redmi Note 6 Pro boasts two dual cameras. The rear shooter is a 12+5MP combo where the main module has large 1.4µm pixels and Dual Pixel AF. The selfie camera adds a 2MP depth sensor to the 20MP camera of the previous model.

The retail box includes a regular charger (10W) and a microUSB cable – unfortunately, Xiaomi has insisted on the outdated plug. On the plus side, there’s a 3.5mm headphone jack on top and nearby is an IR blaster.

So, what has changed since the Redmi Note 5 Pro? The screen, obviously, it has grown a notch and while the diagonal is technically bigger, the usable surface area hasn’t increased appreciably.

Both cameras have been updated, the old one had smaller 1.25µm pixels on the back and a single selfie cam. The RAM/storage minimum has inexplicably gone down, the Note 5 Pro didn’t go below 4/64GB.

Chances are this will be reflected in the retail price, but we don’t have that yet – because as we said in the beginning, Xiaomi is yet to officially unveil the Redmi Note 6 Pro.

Not official yet? I've been exporting hundreds of Redmi Note 6 Pro to Indonesia since last week.

Yes, to trick cuatomers for order this smartphone, i mean is not bad phone, but price will go down in week or two, also if someone have Note 5 Al (Pro in India), is not worth to exchange for this one, except if someone really like that gigant notch. ...

This is upgrade smartphone from Xiaomi, but not upgrade from Note 5 AL (Pro), but from Redmi S2, really. Better screen, better processor, at least metal back (frame is still, plastic).. If you look today price of 185$, in oktober that will be max 150...