Xiaomi Redmi Note 7 pops up on Geekbench with Snapdragon 660

Xiaomi announced it is splitting the Redmi series into a separate brand, with the first phones coming on January 10. We expect these to include the Redmi 7 and Redmi Note 7. Now one of those popped up on Geekbench, revealing a Snapdragon 660 chipset. 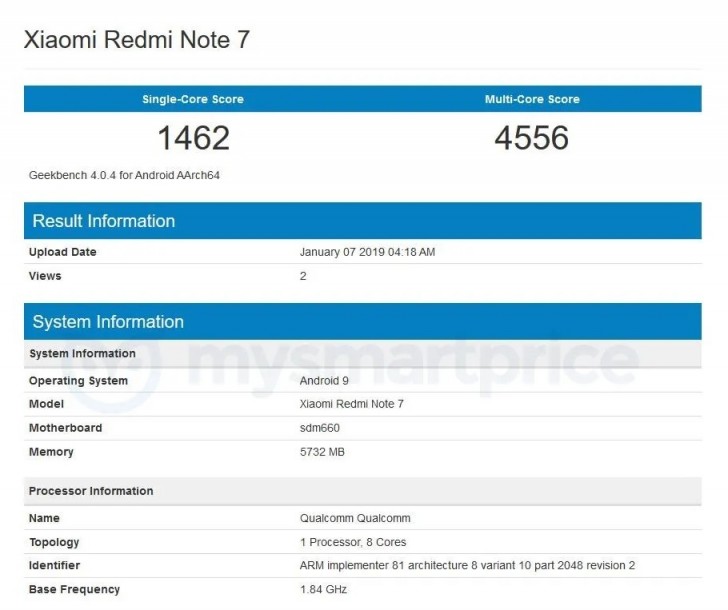 While the results of 1462 for a single core and 4556 for multiple cores are in line with other SD660-powered phones, the new chipset is good news for itself. The Redmi Note 5 Pro and Redmi Note 6 Pro both spotted chipset built on the 14 nm process Snapdragon 636, meaning the Redmi Note 7 will be an update of the series.

The OS is listed as Android 9, meaning this device will be the first Redmi with Pie out of the box and just the second Xiaomi device in general after the slider Mi Mix 3. Geekbench also reveals the Redmi Note 7 will come with 6 GB RAM, leaving a beam of hope we might see a Redmi Note 7 Pro with 8 GB RAM on Thursday at the launch party.

Seriously, Snapdragon 660 in 2019? Even Samsung started making Snapdragon 710 devices. That is just an old Processor and it's not worth it, because it will fall behind by a year or so. I have nothing against Xiaomi, but they should up the pro...