Xiaomi Redmi Note 8 may be the cheaper of the Note 8 duo, but its build quality is what many would consider premium. The Note 8 is a glass smartphone like the Note 8 Pro, though it has no fancy curves and instead relies on a more traditional shape. 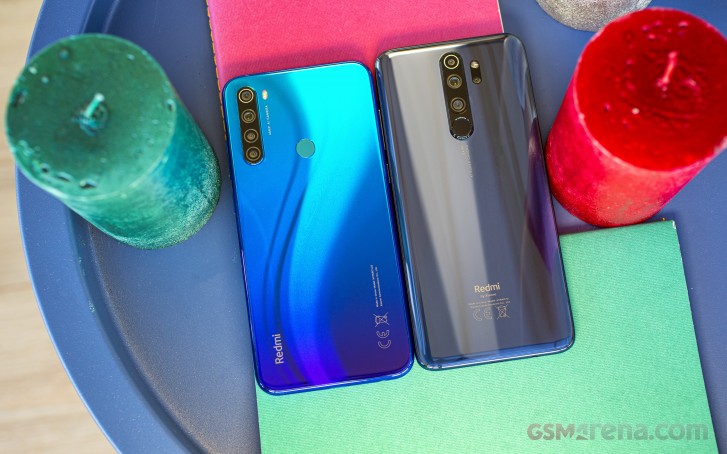 The Redmi Note 8 has two flat pieces of Gorilla Glass 5 serving as panels. The front one is guarding the screen, while the rear one is painted in one of four hues - Neptune Blue, Moonlight White, Space Black, Nebula Purple. We have the Neptune Blue here, and it's as mesmerizing in person as it looks on these photos.

The Neptune Blue version is based on the somewhat pearly blue color that goes gently to purple towards the bottom of the phone. The Moonlight White goes from light blue to light purple; the Nebula Purple is playing entirely with purple gradients, while the Space Black is simply black. Whatever you choose, the looks will always stay as brilliant. 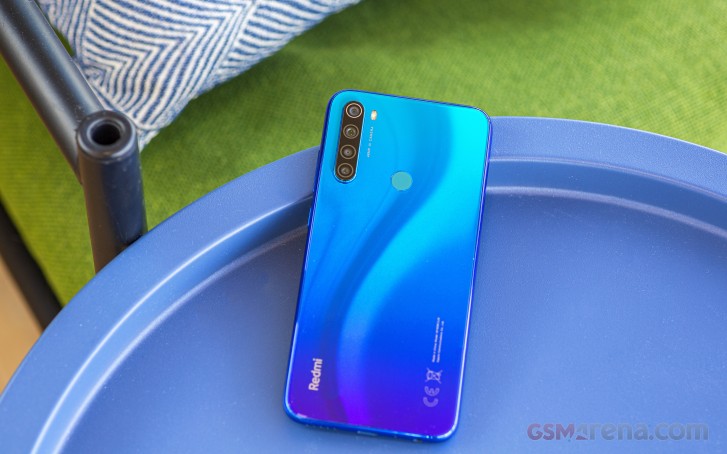 So, the Redmi Note 8 has a 6.3" IPS LCD panel taking most of the front. It has a droplet-shaped notch for its 13MP selfie camera. There are some hidden components on the top bezels - a white notification LED light is on the left, the thin earpiece grille is at the center, and some sensors are pretty invisible on the right. 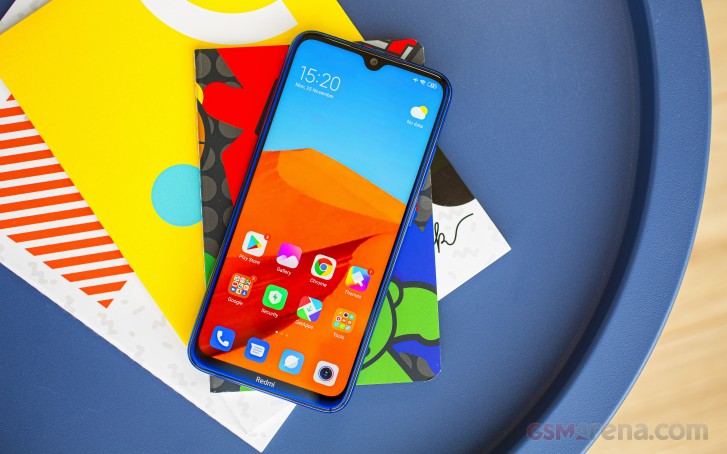 Speaking about the bezels, the Redmi Note 8 may not be shining as a bezel-less device, but it sure has one of the most beautiful display frames we've encountered lately. There is a very subtle blue accent on the left and right bezel, which intensifies around the bottom just below the Redmi logo. It is not over the top and makes for a cool and unique look.

The frame is painted in the same blue hue as the bezels, and it adds even more points to Redmi Note 8's looks. It is made of plastic, though it took us a while to figure that out as it doesn't feel cheap at all. So, we definitely won't hold the choice of material against this Note. 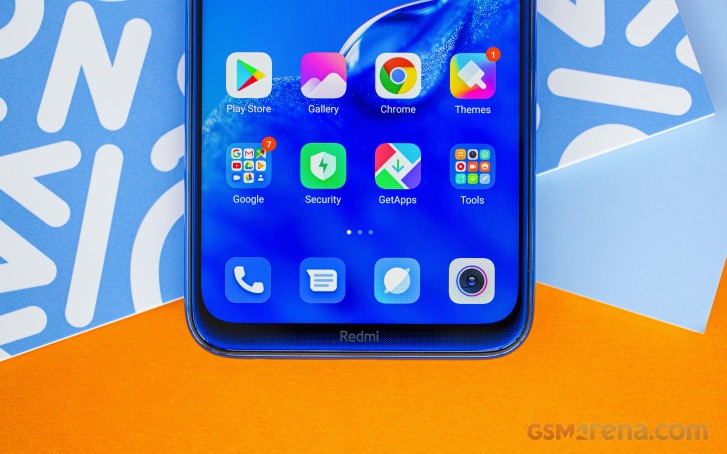 Some interesting bits around the said frame are the triple card slot on the left with an independent microSD tray. Then there is an IR blaster at the top, while the bottom has the audio jack and speaker grille flanking the USB-C port. 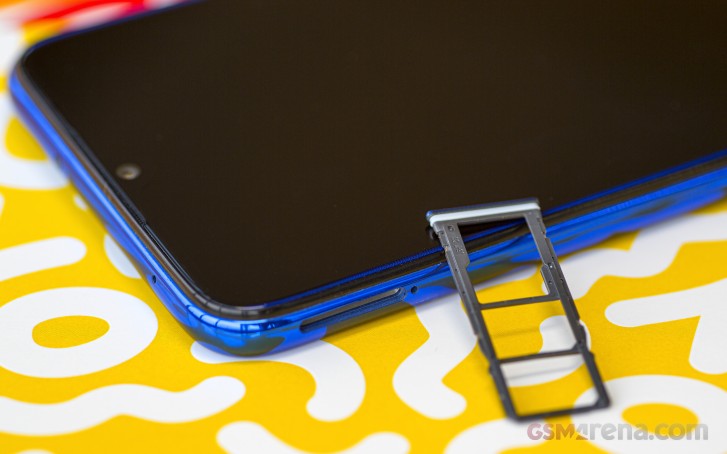 The back is a stunning view, and we'd understand if you take a moment and enjoy it. The gradients are gorgeous, there is an awesome S-shape under different light conditions, and the pearl-like color is one of a kind.

There is a huge camera hump on the left that houses four cameras - the 8MP ultrawide, the 48MP primary, the 2MP macro, and the 2MP depth sensors. There is a single LED flash outside this mountain. 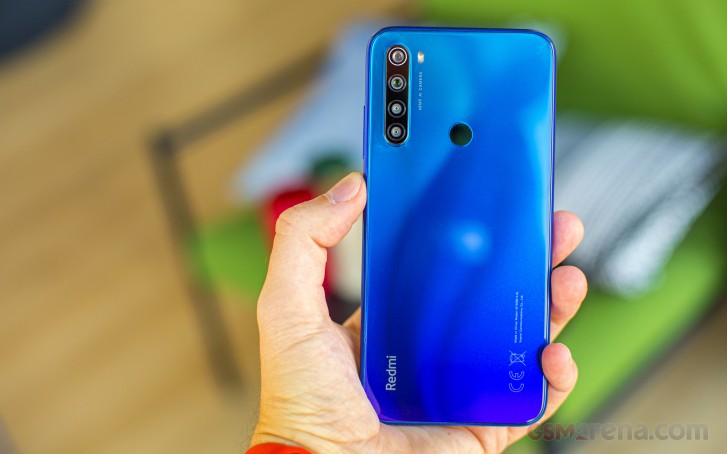 Indeed, with such a huge hump, the Redmi Note 8 would wobble a lot on a flat surface! If you leave it lying on a desk and try typing on the keyboard - you won't like the experience. Then again, the bundled silicone case and this issue will go in a flash.

We also like the rear-mounted fingerprint scanner. The touch-sensitive area is rather small, but it's always-on and pretty accurate. It's a bit higher than usual, and it may require some adjustment period. 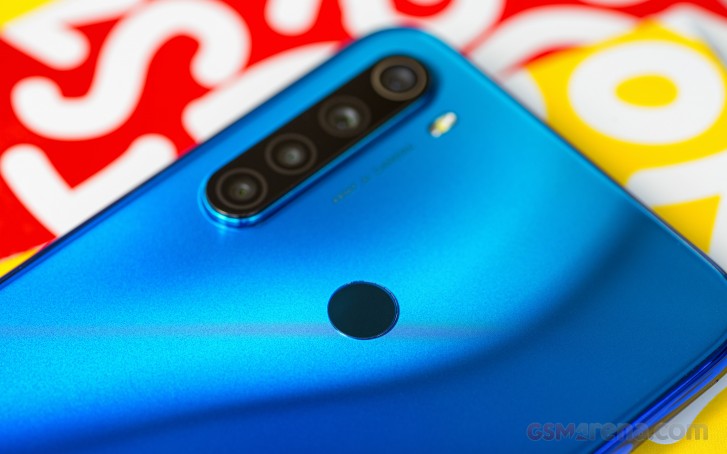 The Xiaomi Redmi Note 8 is a good-looking smartphone with exquisite paint job and sturdy build. It is a slippery thing considering all this glossiness, but most of the phones today are. That's why it has a bundled case within the retail box - it keeps it safe and provides a much-needed grip. On a positive note, even without the case - it feels more secure than the Pro models as both of its glass panels have no curves.