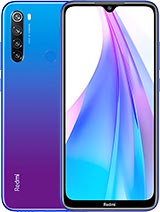 Anonymous, 14 Dec 2019What is the difference from the note8 ??This one have NFC

Zorrrro, 27 Nov 2019Just got mine a couple of days ago ,battery drains fast and tends to get hot under 30 mins of ... moreCould be because MIUI 11. I've heard it's a battery killer for some people.

Bro , 09 Dec 2019It's almost even the same with Redmi note7 S. They only replace SD 660 with 665Yes. GPU is even weaker according to notebookcheck, Adreno 610 is slightly weaker in many of the tests relative to Adreno 512.

Anonymous, 14 Dec 2019What is the difference from the note8 ??Redmi Note 8T has NFC. That's the main difference.
According to GSM Arena there are 2 other differences: 8T has MIUI 10, and Note 8 has MIUI 11 (which I've heard kills the battery for some). Also, 8T is slightly longer but has 6.3" the same display. That's pretty much it

Is it possible that my phone has bluetooth version 5.0 ? Here it says it is 4.2,but i installed some apps like aida and idevice ans both of them said that there is 5.0

What is the difference from the note8 ??

Miui 11 update in Serbia released today. Size is around 424Mb

This phone or oppo reno z??

aliofage, 10 Dec 2019Why do they do this. Almost same the others but a new phoneJust trying to use all remaining spare parts from previous phone models. Also need filler monthly devices while thinking of the next gimmick.

So far, we went from battery capacity to number of cameras and now, megapixels.

Why do they do this. Almost same the others but a new phone

zaafon, 04 Dec 2019Does this model have support for gcam?Yes it does. Gcam Night Sight blows stock cam Night mode out of the water. Astrophotography working as well.

Bla, 22 Nov 2019Yeah, that 3/32GB option is great. Very futureproof. Blajust use microsd and you're all set. 3gb is still plenty for basic task, and even if it's not, just buy the 4gb version instead. complaining because you have more option than you want is stupid
and lol, what's that about "futureproof"? the irony is those people with low specs gadget use their phone for years while the ones with flagship can barely hold their phone for a year.

Does this model have support for gcam?