The Redmi Note 8 is a capable, yet very affordable midranger from Xiaomi with one notable omission in the specsheet - there's no NFC. Well, an NFC version is in the works, apparently, and that's the Redmi Note 8T. Yet unofficial, the phone's surfaced in a few live images, boasting the added functionality on a promo sticker taped to the display. 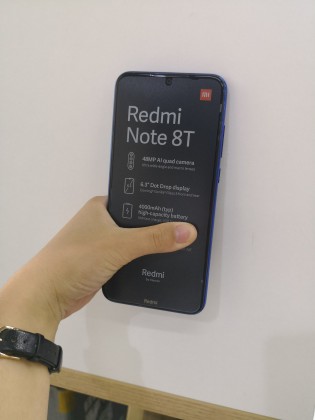 The photos reveals key specs aligning the 8T with the 8 - the 6.3-inch display is covered with Gorilla Glass 5, the Snapdragon 665 is in charge of things and the whole operation is powered by a 4,000mAh battery. Ah, a quad-cam setup on the back has a macro and an ultra wide angle module keeping company to the 48MP primary shooter. Out of the promised four, not getting a mention is the depth sensor.

There's another picture showing the retail package contents and those include a clear case, a charger (18W, as specified on the sticker) and a USB cable. The charger has EU pins indicating some of the markets where the Redmi Note 8T may be headed for. The source of the images pinpoints the price for a 4GB/64GB version at 199E. It's unclear when the Redmi Note 8T will go official, but the fact we're looking at a retail box and not just a single shot of a phone in a back room, means 'very soon' to us.