Xiaomi has unveiled its plans to host a launch event for a new, super-thin flagship smartphone. The company is holding the event on January 15 at the National Conference Center in Beijing and has outed a teaser image to focus on the upcoming phone's thinness. 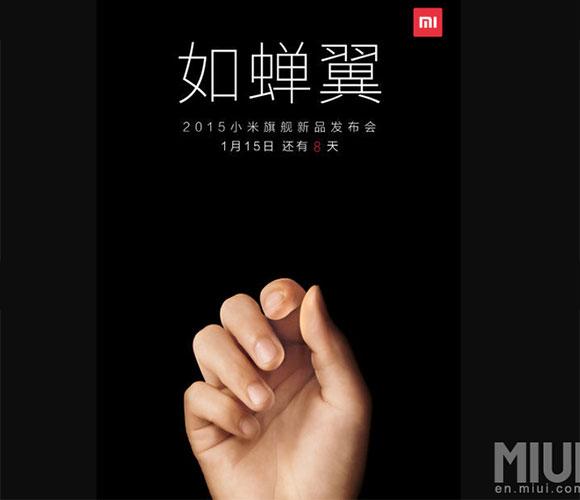 There aren't any rumors regarding the specs of the phone so far. However, a Xiaomi representative has shared an interesting tidbit, that the upcoming flagship will be thinner than cicada insect's wings. Naturally, this is an over-exaggeration and we are yet to see how far the whole diet thing went.

Surely, there will be more teasers of the device in the coming week. For now, all we can do is wonder just what is going to be inside the flagship.

Xiaomi was one of the most successful smartphone makers in 2014 with more than 61.12 million smartphones sold. The company strives to reach 100 million in 2015, so it better have some killer offerings in the pipeline.

oooh, thin smartphone?? i want it!! have been waiting for this for a long time!

We don't need a thin smartphone, all we need is smartphone with long last battery..

A slim phone is always bad news. Either it implies a big phone, small battery and/or both (just look at iphone's huge bezels). So thinness implies bad ergonomics and even worse battery. Mi4 is ergonomically one of the best phones of '14 . Sad to...