Xiaomi's flash sale business model is prone to achieving record sales in small amounts of time by design. So it's no surprise then that the Chinese smartphone maker has once more gone through some inventory at an insane speed.

Over in Singapore, 5,000 Xiaomi Redmi Note phablets were sold in just 75 seconds. If you go by the time it took alone, that's a very impressive feat. 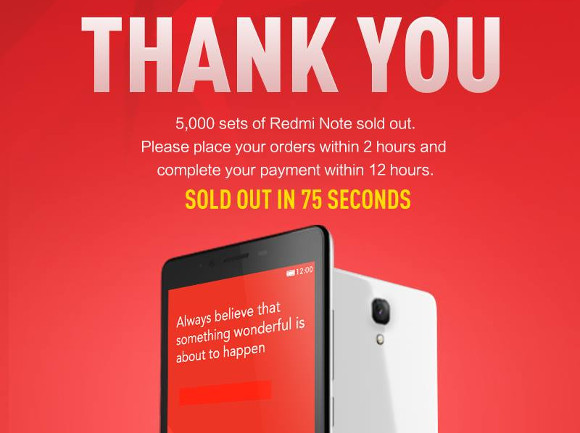 However, 5,000 units isn't really that much, is it? Singapore has more than 5 million inhabitants, so 5,000 devices would be good for 0.1% of the population over there.

That puts things in perspective, doesn't it? And while Xiaomi's batches aren't generally very big, 5,000 is a pretty low number even for them.

Anyway, Xiaomi does seem to be rather successful in Singapore, so we're hoping that during its next flash sale it will have more devices ready to be sold, since we assume there were many people who wanted to grab a Redmi Note this time around but couldn't.

I don't have a high income and able to spend 200$ but want a phone with flagship performance.. what else could be a better option than this? a perfect phone for middle class performance hungry people!