Xiaomi sends event invites for April 25, may unveil the Mi A2 / Mi 6X

It’s no coincidence that rumors of the Xiaomi Mi A2 / Mi 6X are intensifying – there’s a good chance that the phone will be unveiled a couple of weeks from now. Xiaomi posted an invite for an April 25 event, which unfortunately doesn’t give away much.

Not that rumors didn’t spoil the plot – we’re in for an 18:9 refresh of Xiaomi’s Android One phone (which, will also run MIUI under the Mi 6X name). Yesterday it came to light that the Mi A2 will be powered by Helio P60 and will have an upgraded dual camera compared to the Redmi Note 5 Pro. 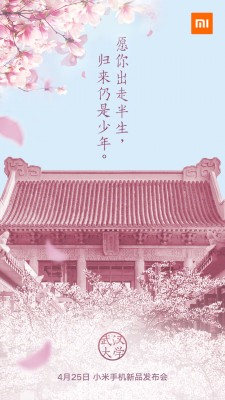 The invite for Xiaomi's April 25 event

The phone should be about the same size as the Mi A1 given that it will have a 5.99” screen. The 2,910 mAh battery is a bit of a downgrade, though, while the memory setup remains the same – 4 GB RAM and 64 GB storage.

We do like Android One phones and we like Xiaomi prices (speaking of, the price of this one is still under wraps). So, we’re marking our calendars for the Wednesday two weeks from now.

Admittedly, there's a chance that the Blackshark gaming phone will be unveiled instead, but the teasers we've seen so far have been light on the Xiaomi brand - instead, it appears that Blackshark will operate as a separate sub-brand.

Not every! Look at Sony or Nokia! Have you heard about project Treble on Android 8? Or about GMS Express? Nevertheless, frequency of 2.2ghz on Tenaa website shows that it will not be P60. It can be S626, S630 or S660, but not P60

No weaker GPU than 636! Especially on most advanced API, P60 win on opengl 3.1.1 and Vulkan...or on advanced effect like tesselation