Xiaomi's CEO Lei Jun celebrated an important milestone – the company shipped over 10 million phones in September. This is the first time the company has shipped so many units in a single month.

One in ten phones shipped last month were sold over the course of two days in India – the venerable Redmi Note 4 leading the charge. Both Flipkart and Amazon saw strong sales (boosted, undoubtedly, by Diwali). 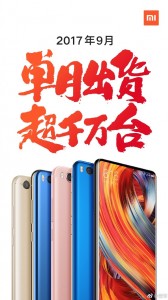 This shows that the company is getting back on track after shipping 70 million phones in 2015 but dropping to 58 million in 2016. Things are looking up for the 2017 total.

These companies from china lie all the time

You've heard >4 years old Mi2S still getting MIUI 9, haven't you? I was one of proud Mi2S owner.

i do not believe that