The flow of leaks and rumors on the Xiaomi Mi Mix 2S is coming to an end. The company just announced on its Weibo profile the launch date for the new phablet. The Mi Mix 2S is arriving with a Snapdragon 845 chipset on March 27. The poster on Weibo also says 273,741 which is most likely the AnTuTu benchmark score of the phablet. 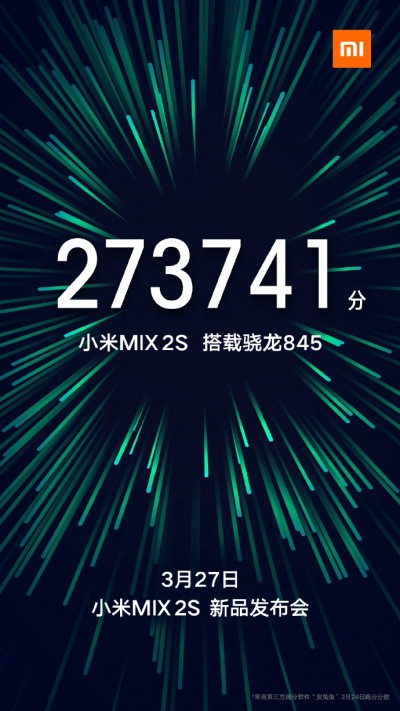 The Xiaomi Mi Mix 2S is rumored to have a 5.99” screen with 18:9 ratio and Full HD+ resolution. The chipset could be coupled with 8 GB RAM and 256 GB storage. Most likely arriving with Android Oreo, the Mi Mix 2S will run MIUI 9 with all the neat features like redesigned home screen and Settings menu and picture-in-picture mode.

Xiaomi has not issued a press conference in Barcelona as part of the Mobile Congress, so the phone will most likely be unveiled in China. This is not the first time the manufacturer goes against the flow - last year it released the Mi 5C and its first in-house chipset Surge S1 in Beijing during the 2017 edition of MWC in Europe.

For a reasonable price it will be outstanding.

Why do you still visit GSMArena then?????

Pass on that ganja you are smoking, bro.