Xiaomi’s Mega Launch proved so long that it had to be split into two – Part 1 yesterday brought several Mi 11 and we expected that Part 2 today will bring the company’s first foldable. It could be much more than that, Xiaomi just announced that it is getting into the electric car business.

It posted an announcement that it will invest an estimated $10 billion over the next 10 years, starting with an initial investment of $1.5 billion. Xiaomi will set up a wholly-owned subsidiary to run its electric vehicle business. Lei Jun, CEO of Xiaomi, will also serve as CEO of that subsidiary as well. 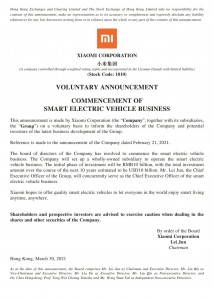 It seems that the electric vehicle market will be the next battlefield for the smartphone giants. Apple is working on a car, trying to find a partner that will bring the car parts while Apple itself focuses on battery, self-driving technology and other hardware/software features.

It’s not alone in this, last month it was reported that Xiaomi’s domestic rival, Huawei, also wants to make electric cars. Unconfirmed info claimed that the company had approached Changan Automobile (a state-owned carmaker), BluePark New Energy Technology and other potential partners.

Don’t miss Xiaomi’s Day 2 live stream, for its first foldable phone, but also for more details on how the company plans to convert its smartphone know-how to the electric vehicle market. Xiaomi already makes popular electric scooters and bikes, but it’s a huge jump from those to cars.

When it comes to stealing technology, this wannade"s are champs.

so when can i buy xiaomi house?

I'd say, you can only start the engine after a few seconds of unskippable intro ads running on the windscreen.. along with its audio. Aand this is for the cheap version car. The premium one ofc, no ads, buttery smooth, a lot more powerful, somew...