XPERIA Play is finally official, thanks to the Super Bowl ads

Sony Ericsson has finally made the XPERIA Play official through a creepy Super Bowl commercial. The presentation is still scheduled for 13 February, but now you finally know what to expect then. Oh, wait... 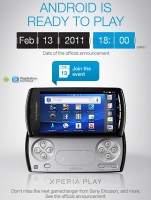 The ad itself turned out to be an extended version of the same creepy one leaked a few days ago.

We are not sure if this commercial would be allowed in some countries because of its setting and illegal-looking thumbs operation. Still we admit it's an ad like no other and will make the people think about it, which is the goal, after all.

The official presentation will take place a day before the MWC in Barcelona - on 13 February. We'll be there to play with it and you'd be the first to know what the feeling is.

Very ironic phone! Phone itself is to die for but its commercial is... well deadly creepy!

experia play........you gotta love it this the phone that sets the trend and benchmarks for other makes/models...cant wait !!!!!!!