Xperia Z2, Z3 and Z3 Compact getting Marshmallow in India and Canada

Nearly a month after it started rolling out in select regions worldwide including the US, the Marshmallow update for Sony's Xperia Z2, Xperia Z3, and Xperia Z3 Compact smartphones has now started hitting units in India and Canada. 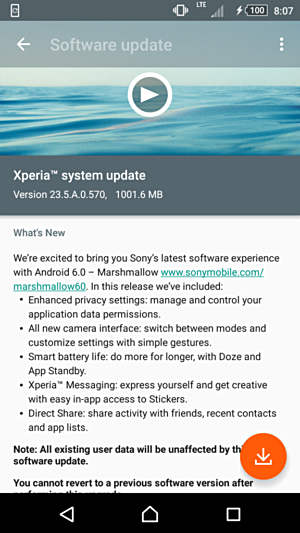 Given than the update has just started rolling out in these regions, it may take some time before it hits your device. Meanwhile, if you're feeling impatient, you can also manually check for it by heading to your handset's Settings menu.

My Z3 Compact has been my secondary phone for a while. Since getting the Android 6.0 update I've been taken back by the phenomenal battery life !! I took it off my car charger with 100% 11.30pm Wednesday evening & it's gone through Thursday &...

I'm from Sri Lanka and still I didn't get the update to my Z2. Is there anybody who didn't got the update?

Htc desire 826 is also mid ranger but it also gets marshmallow update don't protect sony. It's a very poor performance