The Samsung Galaxy Note III seems to pose for every camera it sees – yet another photo of the upcoming flagship phablet hit the web and it shows off the Galaxy S4-like design. Unfortunately, the Note III was wearing a cover, we have yet to see the back of the device (there should be a 13MP camera on there). 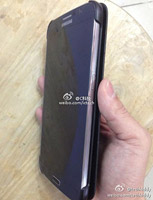 At least the new photo shows the side of the device, which unsurprisingly sports a silver strip with the Power/Lock key.

By all accounts, the screen of the Galaxy Note III should be a 6" Super AMOLED with 1080p resolution. The phablet is expected to use the same Snapdragon 800 chipset that the Samsung Galaxy S4 SHV-E330S will use.

Then obviously you were not paying attention to the difference from S3-S4. Everything is changed and improved. And just like that the Note2-Note3 will be a big overhaul....But these are flagship updates not brand new device releases

I suppose the top bezel is going to be way smaller on the real Note 3.