You are holding your iPhone 4 the wrong way, you know!

Yesterday's iPhone 4 launch was full of surprises - dead on arrival, yellow spots or white dots on the screen, lost reception signal and a bunch of happy users. It seems the yellow spots will disappear in a few days, what about the spotty reception?

There are numerous iPhone 4 users reports of the phone losing signal when you hold it covering the bottom left corner where the GSM and Wi-Fi antennas meet.

Apple states they know of the issue and their official statement is amazingly instructional:

"Gripping any mobile phone will result in some attenuation of its antenna performance, with certain places being worse than others depending on the placement of the antennas. This is a fact of life for every wireless phone. If you ever experience this on your iPhone 4, avoid gripping it in the lower left corner in a way that covers both sides of the black strip in the metal band, or simply use one of many available cases."

Reportedly, Steve Jobs was even kind enough to reply to some user emails - briefly, but straight to the point:

"Just avoid holding it that way."

Ok, we understand how clever it was of Apple to design the iPhone antennas in that way and we can accept new technology comes with its own quirks. But stating a right and wrong way of holding your phone with the latter able to leave you totally signal-less - well that's plain wrong. Not to mention even THEY hold it the wrong way on their ads. 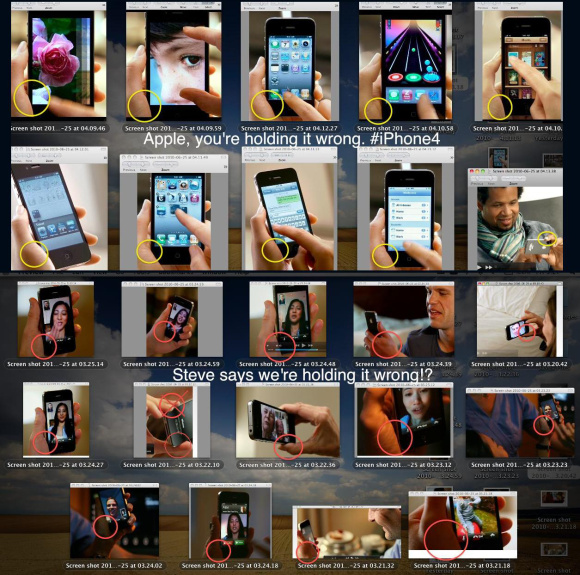 In this particular case what we don't like is Apple's attitude. Pretending such thing is not a big issue, saying it's a normal thing for a cellphone to lose signal, and not admitting a design flaw - that's arrogant. Fans will probably be willing to avoid holding the iPhone 4 that way. Being polite and confessing a wrong goes a long way. So does giving a bonus Bumper case to all affected. Just sayin'.

I call design flaw! You need to hold your phone there (for right handers) when playing games.

dear steve jobs, maybe it's your head that's screwed on the wrong way onto your neck. which has caused a short circuit in your brain activity, the same way your spastic offspring 4 is synaptically challenged to perform the most basic function of ...