ZTE A2017 spotted on GFXBench with SD820 SoC, QHD display

A new high-end smartphone from ZTE has been spotted on GFXBench. The listing reveals that the device - dubbed ZTE A2017 - is powered by a Snapdragon 820 SoC, and sports a 5.5-inch (1440 x 2560 pixel resolution) display. 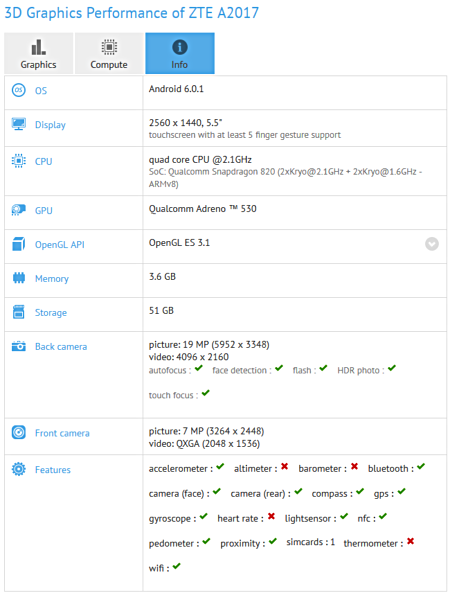 It has 4GB RAM, while internal memory should be 64GB. In terms of camera, the handset sports a 21MP rear unit and an 8MP front shooter. The phone comes with Android Marshmallow (version 6.0.1) out-of-the-box. Connectivity options include Bluetooth, GPS, NFC, and WiFi.

There is currently no information on when the device will be officially unveiled and what will be its final name. Also not known is its price as well as if and when it will be available in the United States.

ZTE is my current phone now. I love my phone with pros and cons. Blade L2

So I've reed, but Z5 is a last years phone. S7 just came out. I'm sure they will have a new cool sensor in the next generation that will knock everything out of the park...again. Sony is leading in this department, hence their sensors are being used ...