ZTE has just announced the Grand Era U985 smartphone, which will debut on Chinese ground in a couple of days.

The Grand Era U985 is powered by a quad-core Tegra 3 processor, boasts a 4.5" 720p display and an 8 MP camera on the back. It will bring support for the local TD-SCDMA networks. 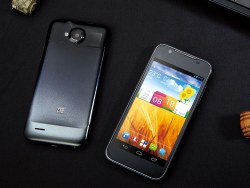 ZTE claims that the Grand Era U985 is the slimmest quad-core smartphone, which isn't exactly true. It measures an all-round 8.6 mm thickness across its body with the slimmest point being 7.9 mm. If we have to be pedantic we'd say that the LG Optimus G has that beat with its all-round thickness of just 8.45 mm, but it's not the first time companies have used the "slimmest smartphone" without doing proper research first.

Finally ZTE is en route to launch a few other devices soon - the Grand Era LTE and two lower-end offerings - the Grand V970 and Grand U930.

Pfff... Another rotten Apple fanboy. You're out of your element here!

i'm still waiting for first 1080p screen cellphone with quad-core cpu, who will won? htc,lg,samsung,apple,oppo or some one else?