The Axon M, ZTE's soon to be released foldable phone has appeared on Geekbench.

As we confirmed yesterday via the FCC listing, Android 7.1.2 Nougat will be the operating system of choice when launched.

Other specs detailed by the Geekbench listing are 4GB of RAM and that it’s running a quad-core CPU on a Qualcomm chipset, expected to be the Snapdragon 821. We expect the Adreno 530 GPU to have no trouble driving the twin 1080p screens providing a total resolution of 2,160 x 1,920 pixels. 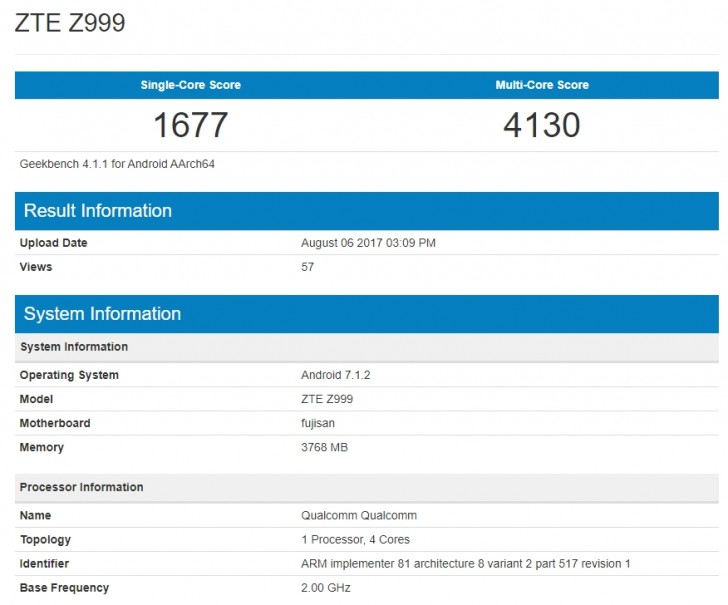 As always, without knowing the production state of the Axon M being tested it’s best to avoid drawing any conclusions from the results. That said, of interest is that the single-core score of 1677 places it right between the ZTE Axon 7 and the OnePlus 5 which run the Snapdragon 820 and Snapdragon 835 respectively.

Additional specs you should expect to get are:

Whilst similar in concept to Sony’s Tablet P which was launched in 2011, the Axon M will benefit from the engineering advances made in the years in between and as a result should be better executed. Whilst a novel concept, it remains to be seen if the general public votes with their wallets.

We’ll know soon enough as the Axon M is due to be unveiled during an event in Brooklyn on October 17.

Sony Tablet P? Yeah, I see it could fail again. Two screen with thin bezel in between is not seamless.

if u dont careful using ur stuff ... thats gonna happen

This is the best, well written news article I’ve read on this site! More like this one please ;)