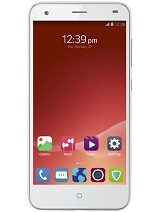 This is the best phone I have ever had though it does get hot very quickly. I would definitely recommend.

vilhelmut, 16 Nov 2018A very good phone. I have used it for a couple of years with no problems at all. Very reliable... moreu are fit3 the best phone in times of 4g LTE phones ,currently I am using it .

A very good phone. I have used it for a couple of years with no problems at all. Very reliable, handy and fast.

user, 09 Aug 2017It's a smart phone.. sometimes too smart til it get confused ans start opening many applicatio... morehi you are right about it being very hot,,i even put it on cold floor for It to cool down u cant pick a call when its hot its burns a little and drain battery faster,its, what do I do about that to stop over heating ? otherwise its one of the best phone I have used clear camera and its faster ,,I now have two of them one old and one new ..but the new its still over heating give me a solution

This phone is the worst! there's always something wrong with it, and there was an app on it that was installed from the beginning that gives you tons of viruses if opened! I found out that the app also tracks everything you do, and had lots of information about me. there is almost no cover's for this phone, It's cheap crap in my opinion

i can say dis is d best phone ve ever used.ve used a lot of brands ,bt q5 stands tall.d best thing about dis phone is it hardly or never got heated. ve recommend it 4 a lot of people & dey are thinking me 4 it.so i recommend it 4 anyone dat wnt to buy it.go 4 it & u will nt regret. two tumbs up 4 q5.

This is the worst phone I have ever used. It switched itself off and on constantly. I read online that to fix this I had to clear the sd card and phone and restore to factory settings. I di this and it worked for a week before I hade to repeat this procedure again. This continued for months until I finally took it back to point of purchase to be told it was my fault and I must have got the phone wet, which was completely false and I took great care of the phone as I had with others. This is a crappy device and don't waste your money!

This is the BEST smart phone I ever had for the similar price range. I used it for 2 years (since March 2015). It is very handy and looks like i7. ZTE s6 is a very handy, slim and light weight. The Camera is much more better than most of the Samsung smart phones. It is more comparable with Samsung j7 prime and I feel ZTE s6 is still better than j7 prime as it is faster. The in-built battery lasted 2 years and then swollen. I change the battery and phone is still working.

Hi
I am shah from pakistan.
I had use this phone.
Where i can get this phone in pakistan ?

It's a smart phone.. sometimes too smart til it get confused ans start opening many applications and do'es things that you don't want to happens... beside that it's fast and easy to use.
The battery get heat too fast and too many times, unfortunately, and get empty too fast as well.
The microphone on speaker mode is really poor and i get a lot of complaints during a conversation. Because the phone get hot you can't talk on regular mode, only speaker mode.
Beside those 3 things, it's a pretty good phone.

Anonymous, 06 Jan 2017Such an overrated piece of crap. In the internet, I read things like "iPhone 6s" killer. First... moreWell it is on par with iphone in some ways in 2015, but comparing it to iphone7 is way too much. First of all iphone 7 is one of the latest flagship, and blade s6 is a midrange phone of 2015. It is not overrated if you will compare to iphone models of 2015, though, there will be a gap of difference over time either positive or negative, it depends on the user.

For some countries they made this model with 32gb storage , in Hong Kong I saw the same but with 3Gb ram.

They made a version of 8gb and 1gb ram for Vodafone worldwide.
This smartphone is a great value for money. For the price and even more ..you will not have better smartphone for sure

Some people made a root for android 6 and its perfect. As you all know, android 5 is not so nice ...

Not Bad.i Think this phone get heated so quickly. Other Functions are good.

Sound quality of this phone is very poor. It can be possible to increase, because no Service centre in delhi NCR/India.

This fon is full of shit doesn't hve power to cach network... I lost my money don't trust you guys

Chanchal, 02 Mar 2017My help pls Wi-Fi and hotspot is not openI agree completely!!!