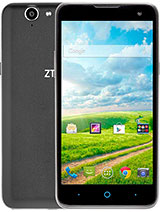 ??What's the max support for the microSDHC??

Best Phone I Have Ever Owned Hands Down …...Super Fast Processor that is a quad , & The Camera takes some crisp impressive photo's / If You Are Looking For A Phone that is a better bang for your buck then this phone is for you / You can't go wrong with This ZTE.
I Know people frown because of the "ZTE" Name or Brand ….But Don't Be Fooled or Don't Knock It Till You Have owned one yourself , As you will be impressed with what you get for the price tag. 5 Stars Rating On This Phone *****

Mine lost screen sensitivity within a year and no repair shop could fix it. Otherwise twas a good phone, it still turns on but the sensor doesn't work. I'm so disappointed, I loved that phone.

Mind lost screen sensitivity and no repair shop could fix it. Otherwise twas a good phone, it still turns on but the sensor doesn't work. I'm so disappointed, I loved that phone.

The phone is really good except for the battery. The original battery did not last a year, and I had to buy a generic one and it didn't work either.

It is a different device, two years older than the one we're talking about here. Major differences include a smaller screen (4.5" vs 5"), a different CPU (Intel Atom vs Snapdragon), less storage (8GB vs 16GB), less RAM (1GB vs 2GB), and different generations of operating systems (shipped with Jelly Bean vs shipped with Lollipop).

BULSHOY, 14 Dec 2016There's no way your Grand X2 is running Jellybean. They ship with Lollipop installed.My zte grand x2 is 4.2.1

Competition should be very frightened, this 150.00 phone kicks butt and takes names. A quad core phone with 2 gig ram and 16gig storage and gorilla glass screen seems like a dream compared to many other phones of its class. It lacks NFC capability but makes up for it by being bloatware free. Comes with Bluetooth and wifi and everything you need to keep up with any other major brand phone and it's HD screen responds very well to touch. Its front and back cameras work great but it's sound system does have a hard time with heavy bass or high pitch treble sounds during video or sound capture. For function and price it's definitely worth the money and a great phone for anyone who wants the function of a major brand phone on a budget. I give it a 8/10.

Kyleeee, 20 Jul 2016How does one update to lollipop from jellybean 4.2.1?There's no way your Grand X2 is running Jellybean. They ship with Lollipop installed.

Rcvd the case (skins) for the Z850 from the eBay seller roxp2012, in decent time (4 weeks total, wow Canada Post, kudos). They fit perfectly and I do not hesitate to recommend this case or seller for the ZTE GRAND X2 case. The white one looks richer than the black one, just my own observation. Now the phone has a good and solid feel. Not ready to trade it in for a newer model....

Fantastic phone. You won't get better for $150. No bloatware, snappy, runs the few games I play no problem.

Brieann, 09 Jul 2016I've managed to find phone cases on eBay for really cheap. But do they fit the ZTE Grand X2?, so far the only sellers of fitted skins is roxp2012, ordered 2 cases, now just waiting on good?ole Canada Post......(snooooooze)

FYI, there is an eBay China seller named Roxp2012 selling silicon skins in colors for U$8. Also a Calgary seller esolutions_canada selling this phone for C$99 + $10 shipping + tax.

How does one update to lollipop from jellybean 4.2.1?

Jay, 12 Jun 2016Anyone find a case of any kind for this phone? That's really all that's keeping me from using ... moreI've managed to find phone cases on eBay for really cheap.

Anyone find a case of any kind for this phone? That's really all that's keeping me from using it. I've got a moto e in an otter box that would be destroyed by now with all the accidental drops it's had.

AnonD-481779, 29 Dec 2015Had for 3 months now. Good phone. When Powersaver is on, the phone doesn't like to bring up th... moreDo you still have phone listening problem

Had for 3 months now. Good phone. When Powersaver is on, the phone doesn't like to bring up the home screen. Also, I can't talk to anyone without it being on speakerphone as otherwise no one can here me. Other than those two issues and no accessories, it's a fast, reliable phone. Battery lasts about 30 hours for me and it takes decent pictures. Best part is it's price that allows you to buy it out right so you can keep your grandfathered plan!

Anonymous, 21 Dec 2015Is the micro usb, OTG functional?No, does not appear to support OTG