ZTE Grand X IN announced, live photos are inside

ZTE just announced its first ever smartphone powered by an Intel chip. The ZTE Grand X IN is running on the Atom Z2460, which is a single-core CPU operating at 1.6GHz bundled with Intel's Graphics Media Accelerator running at 400MHz and 1GB of RAM. 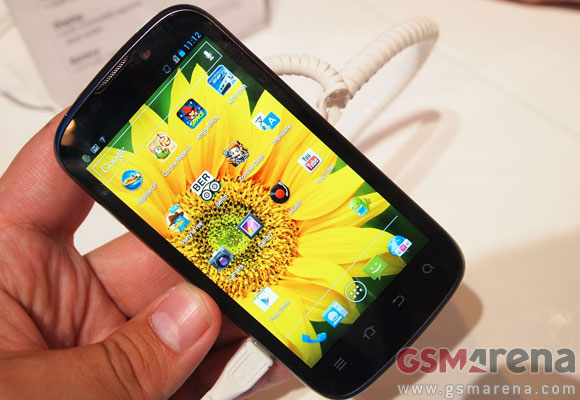 The 4.3-inch LCD display at the front boasts a resolution of 960x540 pixels and is well saturated with good brightness. Viewing angles are above average for a display of this type.

The ZTE Grand X IN runs Android 4.0 Ice Cream Sandwich pretty effortlessly and Intel's Smart Idle Technology should help the modest 1650mAh battery keep the party going for at least a day of work and play.

The smartphone is made entirely out of plastic and feels nice to touch. The grippy pattern on the back panel helps for securely holding the phone in hand. It's not the most lightweight smartphone out there weighing 140.8 grams, but its relatively compact measuring 127 x 65 x 9.9 mm.

At the back, there's an 8MP camera with LED flash, complete with a 0.3MP front snapper. In-built storage is 16GB, expandable by up to 32GB via the microSD card slot. NFC connectivity, Dolby Sound, FM Radio, DLNA and HD Voice with dual microphones round up the specs sheet.

The ZTE Grand X IN launches in September debuting in Greece and Hungary, and Germany later on. The smartphone's unsubsidized price is expected to be around €300, but carriers such as T-Mobile Germany will be offering it for much less on a contract.

This may seem cool, but believe me, the krait cores are much better. They can compare to my dad's notebook, which uses the atom chipset.