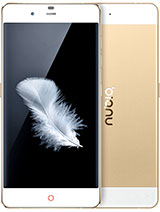 does this phone support otg?

Woooww what a phone! I have him since 1 month and i am very happy with it. Very beautiful build, good camera on front and rear and great sound. What i not like is the software and the battery life but gladly he charges really fast. Need to charge him 1 in 2 days and he charges very fast in 50 minutes. So that's not really a problem for me. The software is a problem. It has no Google Play Services but you can install almost all apps from the Nubia Store. Some apps I can not find in this store and the Nubia Store and Nubia Theme Store are mostly in Chinese language. Wish there was a good rom for this phone...

I have this phone, and it is restarting once per day, or more... Sound on external speaker or headphones is cracking. Any solutions?

I want to know, does this phone support fast charging? Is the battery life better than that of galaxy s6? Like how many hours do I get when I use 3G to browse the net?

Anonymous, 18 Aug 2015Hey! I live in Prague :D. And it can be the dumbest nameever, but still good promotion to our ... morePrague, beautiful place, nice people there... wish I could go there again

Venu Madhav, 10 Aug 2015Everything is superb about the phone except the battery... Its just 2200 Mah which is not suff... moreAmoled display is energy saver screen, but 2200 mAh is not enough for 1,5 Ghz processor, only for 1 GHz, but its low performance, if it would be almost 1,2 GHz, it would be great

I hope will appear Nubia with 4,7" amoled screen

AnonD-349743, 12 Aug 2015I want to know who the hell comes up with these ostentatious names. "My Prague" is p... moreHey! I live in Prague :D. And it can be the dumbest nameever, but still good promotion to our capital...

AnonD-162894, 10 Aug 2015This phone is really awesome 🙆 only need a fingerprint sensor.well if you want finger print scanner, just go for the new zte v3, and its much cheaper

I want to know who the hell comes up with these ostentatious names. "My Prague" is probably the dumbest name ever given to a "premium" handset.

Venu Madhav, 10 Aug 2015Everything is superb about the phone except the battery... Its just 2200 Mah which is not suff... moreWell you can't fit anything bigger in a 5.5 mm body at this stage

Is it Sony C5 Ultra?

I saw it somewhere, oah it was sony...:)) Copy and Paste Masters

Total of 24 user reviews and opinions for ZTE nubia My Prague.
ADVERTISEMENTS