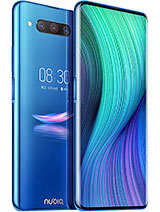 I hope the ZTE people makes a flat screen version. Many users hate useless curved screens and it makes it more complicated to find screen protections. Since it would have 2 screens, it is very important to be able to protect them with out all the complicated curved nonsense.

ESMIT, 30 Aug 2019ONEPLUS AND K20 ARE SO DONE.!!! THE BEAST HAS ARRIVED... This phone is going to take away all... moreRear is fhd+ too. It was nubia x which had a hd+ rear screen. But yes it's awesome overall. Only dumb people would buy the mainstream brand phones after seeing this phone.

GBI, 02 Sep 2019 Any news about release date in EU ?Nubia Z20 will be available in europe sometime in September. Same as north america, Canada, and the uk.

Crackling Doom, 02 Sep 2019And I stated that I will not be buying it because the phone lacks a headphone jack. The commen... moreI didn't mention the headphone jack because replace it with any other reason (notch, battery, screen, whatever), it doesn't matter. The fact that you won't buy it as you said doesn't add anything to the discussion. What kind of replies do you expect to get from that comment? "oh thank you for enlightening mind-breaking insight which us will follow"? Or if you will say you don't expect/want replies at all, then all the more reason not to post such a pointless comment.

Also telling me you don't care shows how much of an a-hole you are. Live in a cave so you can do all you want without affecting others.

Any news about release date in EU ?

Anonymous, 31 Aug 2019It's pointless to bother commenting you won't buy the phone. Yes, it's your opinion/comment, b... moreAnd I stated that I will not be buying it because the phone lacks a headphone jack. The comment is very relevant to the phone and "discussion".

If you have a problem with my opinion, take it up with someone that cares.

Technically, you can use telephoto for selfie right? Zoom in on those wrinkles and pimples lol

ScottsoNJ, 31 Aug 2019better cameras? better display? how do you know this. I haven't seen any reviews on this yetAbout Samsung or Nubia?

Crackling Doom, 26 Aug 2019Why bother commenting on my comment? See? I can play that game too. It's pointless to bother commenting you won't buy the phone. Yes, it's your opinion/comment, but it defeats the point of this comment system SPECIFICALLY for this phone which is to discuss it

harwey, 20 Aug 2019Clearly better camera,better display,better with updates,even Samsung have better OS than horr... morebetter cameras? better display? how do you know this. I haven't seen any reviews on this yet

ONEPLUS AND K20 ARE SO DONE.!!! THE BEAST HAS ARRIVED...
This phone is going to take away all the limelight of Onelpus and K20, This thing is a true beast packing in a snapdragon 855+ 2.96 GHz octa-core processor which is capable of handling everything you throw at this guy be it multitasking gaming you name it you got it. Coming down to the main attraction of this guy it has to be the second display I mean were now in OLED territory front display is 6.42 inch FHD+(2340x1080)packing in 401 ppi it has bright and accurate colors Aspect ratio of 19.5 : 9 meaning it's going to be flawless for content conspumition, Second screen is a 5.10 inch 720p (1520x720) packing in 330 ppi and belive you don't need more than that on a secondary display, Now you need a beast of a battery to support all that stuff as I said you name it you got it 4000 mAh battery and it keeps on getting better and betteras it comes with quickcharge 4.0 support, Coming to Cameras they're absoulute beauty this guy packs in a triple camera setup (48-megapixel + 16-megapixel + 8-megapixel) and macro of this guy is the best of the best and all I can say it that it can be felt when handled this phone takes mobile photography to whole new level, Speakers sound great and on top of that a usb type c is like a cherry on a cake, It'll be out in 6 gigs, 8gigs of ram and 128 gigs, 256 gigs, 512 gigs of storage. It packs the latest and greatest Android 9 pie, In my opinion, it's one of the finest phones this year. The only area where it lacks has to nubia UI which can be handled by using a 3rd party launcher, Other than that this phone is a TRUE BEAST...

when will we get to see a review for this

Crackling Doom, 26 Aug 2019Why bother commenting on my comment? See? I can play that game too. You don't say? lol.

See? I can play that game too.

This information is for those looking forward to the forthcoming launch of the ZTE Nubia Z20 outside of china. At last the news comes that the phone will be launched globally.
Update: The official press release for the Nubia Z20 has revealed that the Nubia Z20 will launch in the US, Canada, Europe, and the UK in September. Now that's fantastic...

Anonymous, 21 Aug 2019Why would it use both screens at the same time? The smaller screen on the back is only on whe... moreI think Nubia x has that feature and this will have it too. Use an app on front and another at the back. Or the use of camera shows both the front and rear screen so the one being shot can see themself at the screen

UDR, 20 Aug 2019Interesting to see this one's endurance rating. What I feel is duo screens will drain battery ... moreWhy would it use both screens at the same time? The smaller screen on the back is only on when you need it.