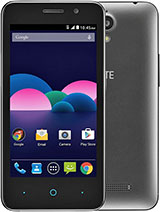 I love this phone, I play Fallout 4, Doom, as well as other great games on this. The internal space in unbeatable, and the fingerprint scanner works before you even put your finger on it! it can read your mind, and tells you before you send your parents your nudes! and holy cow the update time is so fast.. the last update it let me play playstation from anywhere i can even hack other phones remotely from my house its unbelievable!!! and don't even get me started on its porn video playback abilities, I won't go into any details, but it shows EVERYTHING!

ZTE Obsidian is a rich smart phone with a large capacity for apps. it can easily take a number of 20-35 GB apps. My one gripe -- and this is for all smart phones -- is that it won't use the external memory for storing apps. It seems this is so customers will pay for a more expensive phone. So unless you take pictures every moment of your life or insist on downloading movies onto this small screen (compared to a movie theater screen, television screen, or even monitor screen), I recommend using only 4GB external memory.

I added Pokemon Go, and it worked well, but it was a very large app and I couldn't keep it on my phone because of other apps I needed to use. I use it for times I am in places other than my routine.

I use the telephone mode for my main phone having replaced my landline completely with MetroPCS phone service (through T-Mobile network). My Obsidian connects well with any Wi-Fi, including my wireless router at home.

Pictures I take and downloads I get are difficult to find by file manager. It seems I have to use different programs or upload into Google Drive or Dropbox (it prefers Google Drive) to find them. Perhaps in another phone this file-finding function will be more complete, like the file manager in a desktop or laptop.

I find the pictures I take are good images. I use the functions to get better colors through white balance, close-up macro function, and preprogrammed functions as well. I recommend playing with all of these settings to find what they do. If I can do it with a tremor that makes the camera shake, anybody should be able to do so. Any camera with a 2 MP capability can produce a good picture. Anything larger than 5 MP is just vanity and conceit. Or for printing banners.

it's a good phone but the camera sucks. any way to fix tht? if not i'll just get a new phone..

Anonymous, 30 Aug 2016This was definatially the worst phone I ever owned. The battery started over heating the first... moreMine to...can't charge it and use it cause tempature in creases...not just that but I hear random dial tones on it a lot

My thoughts are that those that don't like the phone are comparing it to those that would cost much more. I have owned many inexpensive phones and this one is hands down ten times better all of them. It is so fast compared to all the phones of my past. It has options I have never had, and though I am still learning how to use it, that is really a good thing. Every phone I have ever had for a comparable price you could learn in one day because they didn't do much. So I vote a 30 out of 5 stars.

This was definatially the worst phone I ever owned. The battery started over heating the first day I owned it and I had to be careful when charging it. This phone really sucks!!!

Well, the phone is really weak, but for $60 it had been doing what I wanted it to do: it worked for two weeks without bugs until i bought a good one. So not that bad buy for me.

Easily the worst phone i've ever bought.Did not expect much whatsoever as I was looking for a basic phone to handle calls and texts.This cost me about $150 at
T-molibe,what a waste.First week the phone would restart itself while handling minor tasts such as texting.The phone does not have enough memory to update its own software.Almost 6 months later and the screen is now unresponsive,it often taps itself on the right side of the screen opening up apps and changing its own settings.Trying to make a call is a nightmare,time to switch.I would have honestly preffered a brick of over this crap phone.

I wish I'd never bought this phone. I shouldn't of expected so much from something so cheap!
There's too little storage space on here for apps and you can't move anything to the sd card but photos and vids. I don't know about other obsidians, but mine won't even let me look up apps on the play store, I gotta do it on Chrome bc it crashes when I try. The only thing this phone is good for is basic uses, like making calls, using email, and the internet.
I wouldn't suggest this to anyone unless you don't mind not having very many apps, music, and lag here and there. My old phone was a bit faulty, but it was way better compared to this.

Can zte obsidian metro phone can go on Facebook live I wanna know please ? And this a android

Anyone who is having problems with this phone like I did, read here.
Not a bad phone after you root it with KingoRoot apk, was able to delete all the bloatware off of it, underclock the cpu, and I average about 2 1/2 days for battery life.
Using rootdim which also dims your screen past OEM is nice, so I can technically use this phone with 10 hours of screen time.
Rooting this phone really wakes the quad-core cpu on this phone and makes it much more responsive. I highly recommend it, and those who don't want to root it can disable all the useless bloatware in Android's built-in application manager in the settings, very useful.
Just don't install BusyBox or Xposed, I heard that'll boot-loop the phone.
8/10 overall, not bad for $40

Not bad, would be the perfect two words for this phone. Yes people, this is a phone that cost 20 $ and for that price you can't expect a high specs phone. I got mine in october and I can say that for that cheap price, at first it was kind of impressive. However, installing heavy apps like Facebook or other, the phone would start to act slowly and you have to delete the cache everytime you're done with using an app. This may seem like a bother but is actually not a big deal. The original launcher of ZTE is not that good so I ended up downloading an Iphone launcher to access my apps more quickly. The big problem here is the storage, You cannot install apps in the SD card and that pisses me off considering I have a 32 gb card but I can only use it for my photos, videos and music. What were they thinking? 4 gb is not enough for apps. But oh well, I might go back to My samsung galaxy with straight talk. It's not a bad phone if you don't really use apps to often, and 20 dollars for this... I think its a great price for it! that is my recommendation people.

Worst freaking phone ever!!!!! Out of nowhere it started to click on the screen, it freezes and crashes, when a text pops up I can't respond right away, types words I don't type, storage sucks, does not download apps even tho there is more than enough storage for the app, calls people at random, camera sucks, it is just the worst "smartphone" ever. Can't even listen to music without it messing up.

worst phone i've ever had, one morning i woke up and there was a software update available, but when i download it an error occurs and now my phone is stuck in a bootloop. thanks a lot T-mobile. please don't waste your money on this phone

Worst phone ever!! Won't play music on auxiliary cord in the car, just started freezing when I try to listen to music, too too many pop-up's,pls anyone let me know where I can get my 50 dollars back!

Do not accept zte update .it says it enhances your phone all it did was f
...up my phone. Zte ,please don't send me anymore of your so called updates until you know what the hell your doing.....

Total of 59 user reviews and opinions for ZTE Obsidian.
ADVERTISEMENTS