When ZTE unveiled the Axon mini back in July this year, not much was revealed about the device except a 5.2" Super AMOLED display and force touchscreen. However, the company has now shared the detailed specs of the handset, as well as confirmed its global availability. 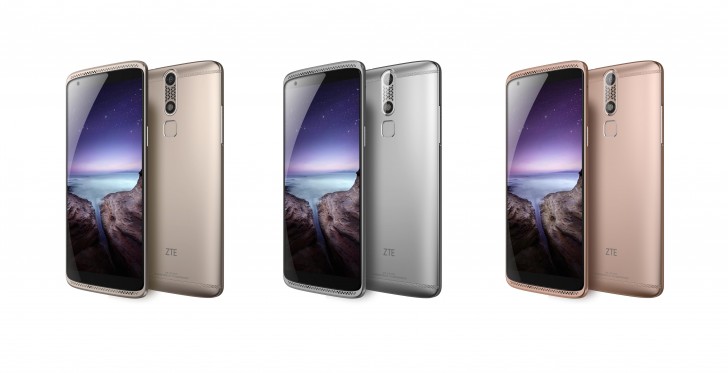 Specs-wise, the handset is powered by a Snapdragon 616 chipset with octa-core processor and Adreno 405 GPU, and sports a 5.2-inch Super AMOLED FHD 2.5D curved-edge screen. It comes with 3GB RAM and 32GB expandable internal memory, and packs in a 2800mAh battery.

In terms of camera, the Axon mini features a 13MP rear unit (with phase detection autofocus (PDAF) that the company claims offers a focus time of just 0.1 seconds) and a 8MP front shooter. It comes with a pressure-sensitive touch screen, and its body is made from Boeing 787 aircraft-grade aluminum-titanium alloy. The device also supports multiple biometric authentication options, including fingerprint, voice control, and eye-scan.

On the software side, ZTE claims that the handset's voice search function can be activated within 1.2 seconds, and it offers real-time voice translation, with support for English, Chinese, Japanese and Korean. It also features voice messaging and chat functions.

An NBA variant of the Axon mini also exists, featuring images and services related to the league.

As for the availability, ZTE says all versions of the handset will be available for purchase in China through the company's very own MyZTE store as well as JD.com and major retail outlets. The device, which comes in Ion Gold, Chromium Silver, and Rose Gold colors, will be available in Hong Kong, Thailand, Singapore, Russia, Japan, India, Australia, France, Germany, Turkey, Spain, and Italy "in the coming months".

I am not sure ZTE Axon Mini supporst 4G frequencies in USA ... Do your research. Also, the camera was initially announced as f/1.8 which is excellent, now all of a sudden it is f/2.2 which is probably mediocre.

It's a decent looking phone but the specs are painstakingly average.