The ZUK Z1 definitely stands out from the ever-growing crowd of Chinese devices for a few good reasons. First, unlike many of its competitors, it has a strong brand backing by non-other that Lenovo, but perhaps more importantly, the handset struck an official partnership with Cyanogen from the very beginning. In an essence, the OEM tried to pick up where OnePlus left off with the OnePlus One, before the OS scandal and the strategy seems to be generating results. 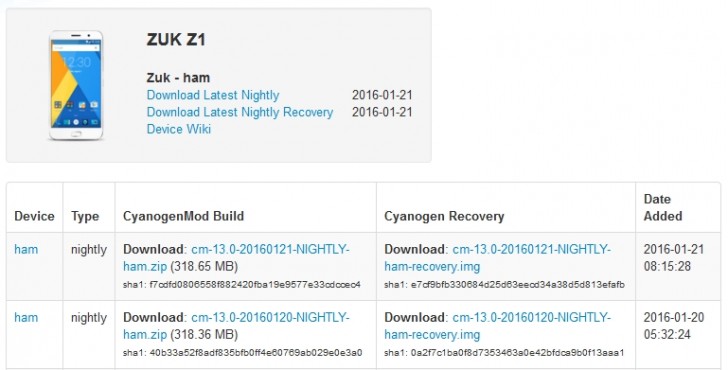 The ZUK Z1 was posed to receive a Cyanogen 13 build sooner or later, given this arrangement, but we were a little surprised to see working ROMs before the end of January. Now, there is a catch, the Android 6.0 builds in question are nightlies (read not retail-ready) and come from the development branch. This means that they are prone to bugs in this early stage, as evident by the fact that two packages cm-13.0-20160120-NIGHTLY and cm-13.0-20160121-NIGHTLY were published only a few hours apart. Plus, they are marked as Cyanogen Mod and not Cyanogen OS, like the official release will be.

An official build is imminent and once it becomes available, it will start seeding to devices as a stable OTA. If you rely heavily on the ZUK Z1 and want it to function properly, we would advise you to wait on the official update, but eager developers and tinkerers can head over to the download page in the source link and manually flash the firmware today.