Acer probably isn't a name you instantly associate with smartphones, but it's been churning out Android devices left and right for many years now. And it turns out the Taiwanese company is currently working on a new phablet.

It will be called Liquid Z630, and most of its specs have been leaked by a benchmark database. This obviously means someone with a prototype took the time to run said benchmark on it. 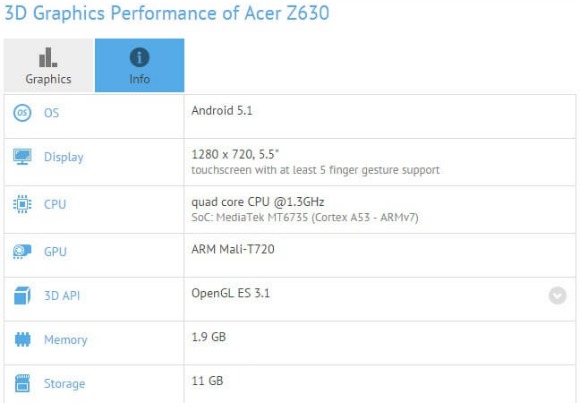 So, the Liquid Z630 is unashamedly a midranger. It sports a 5.5-inch 720p touchscreen, an 8 MP rear camera with LED flash, an 8 MP selfie snapper too, 2GB of RAM, 16GB of built-in storage, Bluetooth, a compass, GPS, Wi-Fi, and a gyroscope. It runs Android 5.1 Lollipop.

At the helm we find MediaTek's MT6735 chipset, boasting a 1.3 GHz quad-core Cortex-A53 CPU and ARM Mali-T720 GPU. Since the SoC supports 4G LTE connectivity, we assume the Acer Liquid Z630 will come with that too.

These are all the details we have for now, but we obviously expect this phone to be pretty cheap, considering the specs.

I dont know exactly why acer allway ussing chipset fomr mediatek for mobile series of them. I think Acer allway focus citizen cusstomer and slae out price cheaper more other mobile. I vote for Acer due many fiend still using this brand and feed back ...