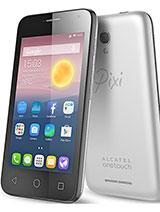 My alcatel is still working up to now.

This phone is so very durable
I accidentally drop it on water...yes it is still working

Thanks Alcatel co. Your phone is very great ðŸ˜

Pixie , 22 Nov 2018I moved countries a year ago, and I was quite broke but needed a new phone. I purchased this p... moreThis device is very bad ram only 512 mb and this brttery is very low level.I don't know why make this device .always ram is full.

I moved countries a year ago, and I was quite broke but needed a new phone. I purchased this phone, I was very happy with the quality of the phone for its price,and I like it and want to keep using it. Sadly there are numerous problems I wish to address with this phone.

- I purchased this phone new, was happy to see whatsapp installed. I went to use it and it didn't work, it said I need to update WhatsApp. No big deal, so I tried... Not enough memory on the brand new phone! I hadn't downloaded anything yet! Anyway I went to buy an SD card, and splashed out on 16gb to be safe and tried to move apps to SD card, but it wasn't even possible. I managed to eventually update WhatsApp by deleting Messenger app... 1 year later and I still am unable to move any apps to the SD card, so I've been unable to download any apps :/

- Because I am in a new country I have few contacts, so when I receive a phone call I think it would be good if I could see WHO is calling. Every phone call I've had only shows a phone number but not a name! It's not until I check the missed call (because I don't answer if I don't know who is calling) and then it shows the contacts name. This is highly frustrating as I've used mobile phones since 2005 and never had this issue with any phone, in fact it is unheard of! I have saved every contact onto Sim, phone and Google contacts, all 3, and still no joy.

Yes it is a cheap phone, the battery isn't amazing but I like this phone, I want to keep it, it is the first smartphone I have ever purchased, and after a year it is sentimental. But not seeing contact who is calling is a major frustration! As is having no space on it, even after wasting a lot on a big SD card

is this phone working in the USA?

I have this kind of phone and these are the following issues;
1. Easily battery low
2. Easily hot when data is on then automatically turn-off when it is warm.
3. Cannot handle 2 program opens at a time.
I only waste my money at a cost of 2,500 pesos from SM gensan, Philippines.

nes, 02 Aug 2017yes you are right i have bought this phone 3weeks ago and i am surprised it has a good speaker... moreMy pixi first is easily rooted with "Kingroot" app.

AnonD-688891, 01 Aug 2017Bought this phone not expecting much for the $40 but was pleasantly surprised,snappy action,ve... moreyes you are right i have bought this phone 3weeks ago and i am surprised it has a good speaker and apps can be easily move to sd card. i am still looking for a way to root this phone. this phone will do more when it is rooted.

Bought this phone not expecting much for the $40 but was pleasantly surprised,snappy action,very good speakers,radio tuned in quickly and very good sound,same with music player,easy to navigate,memory ok if you shift stuff to the SDcard. Very impressed for the price. Ten times better than the slightly dearer vodafone one

Anonymous, 21 Dec 2016how to charge mobile phone battery; li -ion batteries work better when you are not used to th... moreSo what you're saying is we should buy smart phones and use them as little as we can?

Where can I change the ringtone

Ben, 18 Dec 2016Hi I have the same problem. (Can u buy a better battery)how to charge mobile phone battery;
li -ion batteries work better when you are not used to the end 0%,but most to 25 % and then put the battery to charge75-90% , ( why?)
lithium-ion batteries have a rated lifetime of somewhere between 500 and 1,500 charge cycles.
so if it reach 100% or less then 25% then it lose 1 cycle.(the user runs it down all the way to zero before recharging) can degrade to 70 percent of its original capacity in 300-500 cycles
With a DoD of 25 percent, where the user plugs it in as soon as it gets to 75 percent remain, that same battery could be charged up to 2,500 times before it starts to seriously degrade.
Charge a little bit whenever you can.
Lithium-ion batteries don't respond well to being charged all the way up and then run all the way down. They take much better to little bits of charge here and there.
What's far more dangerous to a battery's well-being is heat. Lithium-ion batteries despise heat.
Battery consumption depends on the applications you have installed on the phone and working in the background even if you do not use the phone. such as; facebook instagram messenger if you delete these apps and use them through the browser , thus saving up to 40% of the battery (day)life , the display put on minimum brightness and wi - fi, bluetooth, use it when you need.

michelle, 17 Nov 2016can i buy in any smartphone a bettery for alcatel fixi first a battery have a long life batter... moreHi I have the same problem. (Can u buy a better battery)

Please help ive bought a Pixi First camera unlocked used it in Cambodia and have attempted to use it in Canada but the sim card wont work can you explain why?

please reply I really need it ' .. Are the specification of this phone is true .. I mean its RAM AND ROM especially the Camera . I ordered last week I still don't have the item I don't know when will they deliver it ..

why is it in lazada philippines said its 8bg rom and 1gb ram, but when i bought the item and check the rom it only has 2.5gb rom, the pre installed apps are not that many, its like 4gb rom and 512mb ram in lazada grrr

It's actually a pretty decent phone for its price. GSMArena should update this info because Alcatel upsized One Pixi First to 8GB (at least here in the Philippines). Now it has 8GB phone + internal memory and 1GB RAM. Battery is easy to drain but all in all nice performance. And yes, it can play mp4 like a normal android phone. Cameras was said to have been upgraded to 8MP (rear) and 5MP (front) but it says in the box that both cameras depend on software interpolation, which basically means that they're still 5MP & 2MP but just improved through the software. Sad.

michelle, 17 Nov 2016can i buy in any smartphone a bettery for alcatel fixi first a battery have a long life batter... moreNo it may cause physical harm, you can buy a power bank instead.